A Feminist City Guide to Montréal

You risk falling in love with Montréal after wandering her streets; it is a charming and vibrant city steeped in history yet not smothered by its past. Montréal is a magnet for chefs, artists, designers, and musicians who want to thrive in a place that allows them to be outrageous and experimental but at the same time refined. The city is world-class in so many domains that it would be impossible to categorize it as simply a foodie paradise or an arts and culture hub; there are too many wonderful and varied happenings all over the island.

Going for a walk on a summer day, you would be hard-pressed not to find yourself amidst a festival, parade, impromptu art performance or all three. While Montréal is a foodie paradise, festival haven, and culture hub, the city also boasts unique architecture, history, and parks reminiscent of a Rococo “Fête Galante” painting.

Feminism started a little later in Québec than in the rest of Canada; the Québécois trembled under the gold plated, jewel-encrusted thumb of the Catholic Church until the early 1960s. After Catholicism lost its stranglehold on the province, things began to progress quickly allowing Québec women to become among the strongest, most determined people you will ever meet.

Twenty years ago the province introduced subsidized daycare which has helped lift families out of poverty and has allowed women to have better control over their lives by being able to return to work with less financial burden than those in other provinces. Subsidized daycare has also made it much more feasible to start and run your own business. In 2017, Montréal elected its first female Mayor, Valerie Plante, who is aiming to achieve gender parity on the city council and to make Montréal more equitable across all fronts.

Through history, strong women like Jeanne Mance and Margeurite Bourgeoys were integral in founding Montréal and today women are confidently innovating in many fields, making Montréal a rich, diverse, and inclusive place to live and to visit.

Get your Workout on at this Feminist Gym

Maxine has a small personalized studio in the NDG neighborhood (Notre Dame de Grâce). Her studio is not just for women but her business philosophy supports mothers getting back into the gym by enabling them to bring their pre-walking baby and post toddler child to classes. The all-female team of trainers is extremely knowledgeable and are made up of fascinating women in their own right. Maxine also gives a free monthly workshop on post-natal fitness at Melons and Clementine’s in NDG. In addition to being family-friendly, MGPT is inclusive and body positive.

The first feminist art space in Montréal, born in 1973, is a non-hierarchal gallery devoted to presenting artwork that promotes feminism and other underrepresented artists. Exhibits have included showcases such as ‘To Whom It May Concern,’ which featured artworks from female Cuban artists. The Art gallery is an artist-run center that supports intersectionality and social justice.

Admire the work of a female artist in the Montreal Metro

Marcelle Ferron was a female painter striving for success in the male-dominated art world of the 1940s. She joined the Automatiste Art movement led by Paul-Émile Borduas, that focused on painting. Later she moved to Paris where she learned the art of stained glass and upon returning to Québec she was commissioned by the City of Montréal to create stained glass murals for the Champ de Mars and Vendôme Métro stations.

A feminist artist-run initiative that primarily distributes feminist film, there are many films on their website for a small rental fee. They organize screenings throughout the year, for example; in July 2019 there will be a screening of short films by Québec and Canadian female artists in Parc Lafontaine. Check their website for event dates.

Mingle with women at this feminist art center

A feminist artist-run center that specializes in the digital arts. They have 3 main functions: production, dissemination, and training. As a member, you can benefit from the resources of the studio. The center holds events such as exhibitions, roundtables, talks, performances, and presentations. At the moment they are undergoing renovations but they will be hosting events again shortly.

Dine at this female-owned taqueria

Café Mezcal is a cozy and colorful taqueria serving Mexican fare to make your belly happy. During summer the café is open to the pedestrian street in front of a fountain. Sheila Arias is the only female restaurant owner on Prince Arthur Street, a popular pedestrian street for dining. She says that in the Plateau-Mont Royal district there are a lot of specifically female residents who are actively involved in community projects and are more inclined to support local businesses that serve a larger purpose (female empowerment, environmentalism, etc). The café also hosts events such as poetry readings and music.

L’Épicerie Moderne is hidden gem owned by an exceptionally friendly woman. It is part grocery store, part deli counter heaven. They have an excellent selection of fine food not found in conventional grocery stores as well as gourmet hot sauces, beef jerky, craft brews, and ciders. Their deli counter in the back is a huge hit for the lunch crowd in the area and their baked goods always smell incredibly inviting.

Montréal’s Fairmont and Saint Viateur bagels are legendary but St-Lo’s Bagel in Verdun serves up some truly crave-worthy bagel sandwiches. This restaurant, owned by two women, is the go-to lunch spot for people in the area. The ambiance of the cafe is warm and inviting; perfect for a cold, dreary kind of day.

Honor the Woman who co-founded Montreal

Jeanne Mance was the co-founder of Montréal along with Paul Chomeday de Maissoneuve. In the 1640s she set up the first hospital in Canada. She was not recognized for her contribution to the history of the city until they revealed her statue in 1909. However, it was not until 2011 that they finally named her co-founder of Montréal alongside Paul de Chomeday. Her statue sits in the car park of the Hôtel Dieu Hospital on St Urbain.

Museum of Marguerite Bourgeoys and Chapel

Marguerite Bourgeoys is a highly celebrated historic female figure in Montréal. There are several educational institutions named after her in recognition of her contribution to the education of marginalized communities (girls, poor, indigenous) in the 1650s. This museum celebrates Bourgeoy’s contribution to the founding of Montréal and her influence on education across Canada.

All of the designs and products on offer at Belle et Rebelle are exclusively designed by women with a focus on Québec brands. The boutique donates and supports the Maison Passage, which is a shelter and center that helps women from 18-30 years old in difficult situations. The products in the boutique are high quality and extremely wearable, they carry everything from cosmetics, accessories, dresses, to swimwear.

L’Euguelionne is a feminist bookstore and non-profit co-op specializing in women’s literature as well as literature from other underrepresented communities. They hold literary events, book launches, reading circles, and workshops. The bookstore sells feminist, queer, LGBTQ+ literature in both French and English, their collection includes, poetry, essays, novels, children’s books, comic books, and zines. Their space is located in The Village, Montréal’s incredibly inclusive and vibrant neighborhood

Feel like royalty at this 'tiara to glass slipper' shop

Castle created Boutique 1861 to inspire women to unabashedly dress up from ‘tiara to glass slipper.’ The shop is full of dresses to suit every occasion and fantasy. She has expanded her line from dresses to bridal fashion with Boudoir 1861, and has also opened La Petite Garcon to address a less romantic and more minimalist yet still feminine aesthetic. The inside of Boutique 1861 on Saint Laurent is straight out of a Marie Antoinette fantasy.

Vibrant prints from a female designer

If you’re looking for bold, vibrant, and unique prints, then you must check out Katrin Leblond’s boutique. They are her original patterns and designs that are made from locally sourced materials and sewn in her Montréal studio.

Founded by Marie-Eve Emond, they sell quality, timeless fashion made locally in Québec. The boutique is a beautiful, bright, and airy space that compliment the products they sell.

The Arabesque Burlesque team teaches burlesque dance classes as well as fitness classes with a goal to inspire and empower women. They also perform at the Wiggle Room, Canada’s only dedicated burlesque space. You can take in a show or drop in for a burlesque-inspired fitness class.

A Woman's Only Hotel in Montreal

The Residence Maria Goretti is a female-only accommodation that provides hotel stays to women looking for a safe and friendly environment. They also have long term lodging for those moving to the city as well as transit stays for women over 45 years in need of temporary residence. They also provide assistance to immigrants, refugees, and women who are actively looking for employment.

Did we miss anything? Help us improve this guide to Montréal by sending us your tips! 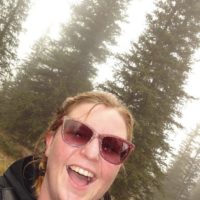 Chelsie Joy runs her travel blog, Joy Adventures and is based out of Montréal, Canada. Having taught in South Korea, UAE, and Czech Republic, she has had the opportunity to travel widely and developed a passion for writing about her adventures. While teaching in Abu Dhabi, she was the Press Relations manager for a not for profit Arts Collective, writing press releases for art shows. She specializes in writing about travel, fitness, and the arts.