The Indigenous Weaving Queens of Guatemala 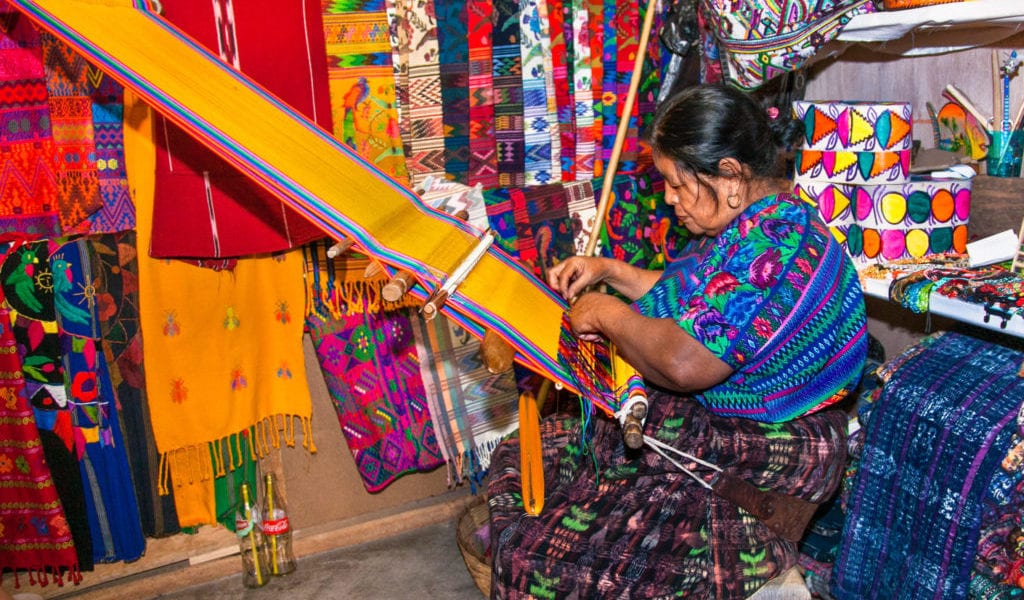 Amparo de León de Rubio and Oralia Chopen arrive at the headquarters of Textiles on a late Monday morning. Their sleek black hair—modestly pulled back into low ponytails—frames matching weary facial expressions. Their short body frames are encased in coarse, thick fabric wrapped around hips in the shape of a simple skirt. An improvised belt on top of embroidered huipil—a traditional blouse worn for centuries by Guatemalan women—is paired with modest plastic slipshoes and woolen cardigans. The ladies are here to work. Confidently handling cups of instant coffee, a group of foreign volunteers, and a pile of arrangements for the upcoming week, León de Rubio and hold a meeting in one of the improvised offices. There is much work to do, designing new products to sell and managing all the day-to-day affairs of Textiles.

The textile cooperative is an association of women for artisan development in backstrap loom weaving. Founded in 1988, Trama Textiles consists of 400 women, forming 17 groups of weavers from five different regions in the western part of the Guatemalan highlands: Sacatepéquez, Sololá, Quiché, Quetzaltenango and Huehuetenango. All the profits made from sales goes back to the organization, and what is not spent on running costs safely lands in the hands of the weavers. The association was established with the help of Dutch volunteers, assisting with the system setup and market demands. Volunteers taught local women about measurements, defining sizes and contemporary practical add-ons, such as zippers. Developing from co-dependent first steps, the cooperative is now run solely by the indigenous women who manage all aspects of production, distribution, and sales.

At the time of the organization’s creation, Guatemala was thoroughly blood-soaked. The civil war—a conflict between opportunistic right-wing government and supporters of the socialistic idea about peasants’ rights to the agrarian land—devoured more than 200,000 lives between 1960 and 1996. The majority of victims (more than 83 percent) were descendants of the ancient Mayan communities. Falling in guerrilla fights or being ambushed en masse in numerous assaults, executed by the official Guatemalan forces, the children of the corn had no real chance of victory. León de Rubio, Chopen and many others that survived were left behind in charred villages, without education, financial means or prospects.

The pain they shared gathered women in the community that were banded together by the silent understanding of the torture and void. Through the use of the techniques passed down from their grandmothers, the women began to weave their identity back, one creation at a time. The weaving methods are more than a thousand years old, deriving from the golden era of the great Mayan civilization, a classic period between years 250–900 AD. Versions of huipiles were worn by ancient Mayan priests and emperors back in the forgotten past. Though the fabric has changed, the form stayed the same.

Different colors, patterns, and embroideries are deeply symbolic, revealing not only the area of origin and the kinship of the wearer but also the mathematical, astronomical and natural truths. The weavers are preserving the invaluable cultural heritage, the ancient reminder of a great civilization, abandoned by their Gods. Through weaving, women gained strength. With regular manual labor, they occupied themselves and gradually managed to extinguish traumatic memories. While rediscovering their raison d’être in creativity they further monetized their artistry to feed their families.

Paying a visit to one of the cooperative’s contributing weavers in San Juan La Laguna reveals the harsh daily life of a typical Mayan family. Tiny homes, nestled among a small field of coffee beans, reveal the pure experience of living almost as one with nature. We arrive and are greeted by three generations of women. The daughter, around twelve years of age, presents us with a youth educational book of geography, searching for the flags of the country of each visitor. None of the women knows how to read, almost half of the indigenous women don’t according to a UN Women report from 2011. Only the younger members of the family speak Spanish, the grandmother still chatters in Tz’utujil language, one of the 21 native languages, recognized in Guatemala.

Indigenous females finish three years of school on average, marrying remarkably young, positioning the country among the countries with the highest rates of teenage pregnancy in Latin America. The unappreciated maternal role is often accompanied by domestic violence—a result of widespread alcoholism and a strong machismo culture. Independence is not a concept they would speak of, although they managed to survive regardless of the literal and figurative absence of men and lack of government aid.

If the indigenous women of Guatemala know one thing, it is how to rely on themselves. The mother prepares a bowl of warm instant soup, enriched with thick pieces of avocado, continuing with fresh piña juice, a product of the only pineapple in the house. While eating, we wonder if the family will have anything left to eat for dinner, having generously served their guests. In the middle of it all sits the traditional strap loom, turning the thread into a scarf, with each swing as if to remind us all that, come what may, there are women, families, and communities depending on it. 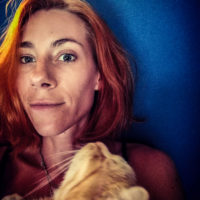 Petra Godeša is a Slovene journalist exploring the globe one story at a time. While living in the era of media spin, she believes in honest reporting, uncovering human tales of overlooked and rejected. Balancing writing projects with photography, the best version of herself can be found travelling throughout the unknown. Or under the sea! One can follow her wanderings on http://restlessheartblog.org.