How She is the Universe Empowers Teenage Girls

A group of teenagers pose for a photo | © Rawpixel.com/Shutterstock

Dominican-born graphic artist and animator, Laura Pena, is on a mission to ensure this generation of young women not only have an outlet to share their dreams but one that allows them to be heard, far and wide. That outlet is Pena’s global media platform, She is the Universe, which empowers teenage girls through the power of storytelling.

For the past year, Pena has traveled the world conducting video interviews for She is the Universe, with teenage girls of all shapes, sizes, colors, languages, cultural and socio-economic backgrounds to find out the answer to three critical questions: Who are they? What do they want to become and, most importantly, how we as a society can help them get there?

The impetus for this journey actually began years ago in 2014, a time Pena refers to as “The Year of Quitting” when she had left her marriage behind, quit her job, and gave up both foods and friends that were bad for her. During this period of release, Pena was suddenly energized by the idea that her life had become a blank slate. Like an artist contemplating an empty canvas, she began to picture how she would fill up her life and create her own masterpiece. She began by considering things she loved to do and with the help of a friend, even made a PowerPoint to help her determine her next steps.

“At first I was in a state of decision paralysis, confesses Pena. “I kept thinking about how could I best use my interests combined with my talents to make a difference in the world? Then I realized the same things kept coming up over and over- storytelling, travel, and mentorship.”

Fast-forward to 2019 and Pena has logged thousands of airline miles, traveled by train, hopped on boats, motorcycled down dirt roads and traveled by foot. She’s couch-surfed, slept in hammocks, shared bunk beds, bedded down in hostels, spent the night under the roof of a 100-year-old house in Holland, slept under mosquito nets to keep out tarantulas in the Peruvian jungle and even crashed on floor mattresses in remote indigenous Colombian communities. She’s done it all with two small bags and one big mission-to find out what our future female leaders and mothers of future generations need in order to make a difference in the world.

“So far, what I have found so interesting is no matter where I am in the world and no matter what language is spoken, the girls all use the exact same word-support,” says Pena. “They all need external validation and encouragement from others, which is so important. Saying what they need out loud is very powerful. No one ever comes right out and asks these girls what their dreams are. This is a critical time in their lives to ask questions like ‘Are you following your dreams?’ and ‘Are you saying no to what’s not in alignment with those dreams?’ I’m here to be their cheerleader and help them have their voices heard.”

To date, Pena has interviewed 51 teens on three continents and ten countries for She is the Universe. Her goal is to interview 111 girls in total. Although she has an application on her site where girls can register for interviews, she says connecting with young women who want to share their story is the easiest part of this whole process thanks to social media and word of mouth. In fact, most times when she arrives in a country she doesn’t know who she’ll wind up interviewing. It just has a way of happening organically.

While finding sources might be easy, one of the tougher parts is financing her journey around the world. So far, she’s relied on her own savings and taking on a handful of freelance graphic design projects. At the onset, she raised $5,000 for She is the Universe through a GoFundMe campaign and has recently begun applying for grants to help buffer the costs. Pena has also recruited talented family members and friends to collaborate by doing pro-bono work such as editing and handling audio.

“I’m so glad I didn’t know how hard it would be before I set out,” admits Pena. “Initially, my plan was to conduct all 111 interviews in one year and soon I realized it was just not sustainable and I needed to be an example to these young women and live in alignment with my message and not burn out.” Pena is onto the second year of her mission, with plans to visit Ghana, Tanzania, South Africa, Israel, China, Japan, Korea, India, Vietnam, and Australia amongst other countries.

During her travels and in between conducting interviews, Pena is writing, editing and creating a short video series comprised of her interviews. Her goal has evolved into one day creating a full-length documentary along with developing a worldwide mentorship program and sharing her experience through speaking engagements.

For Pena who grew up lacking a professional role model and was told by grade school teachers to stop drawing because it would never amount of anything, part of this journey has been about healing her thirteen-year-old self too, Pena says. “This project is not about winning awards or becoming famous,” says Pena emphatically, adding, “I’m going about this as if the future of the world depends on these girls because it does.” 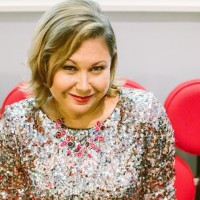 Jenny Powers is a born and bred New Yorker with a knack for uncovering fascinating true stories, staying on top of trends and a lover of words. She writes for a variety of media outlets and is currently working on her first book. To read more of her work, visit
https://www.clippings.me/jpowers