In Scotland, ‘Girls on Hills’ Encourages Women to Hit the Hiking Trails 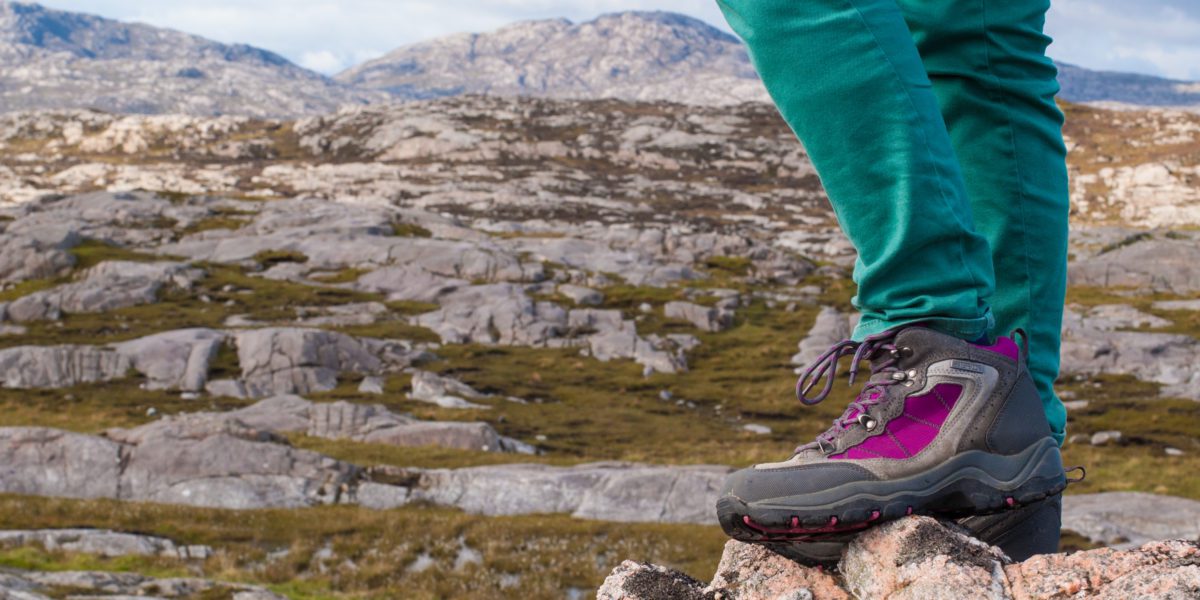 It was a wet and windy day in the Scottish Highlands. Nothing out of the ordinary for this Arcadian country, which magically gains in beauty through thick cloud and near-vertical rain. Here in Glencoe, about two hours north of Glasgow where the mountains so dramatically meet the sea, I’m on my way to meet Nancy Kennedy and Keri Wallace. Together, they established Girls on Hills in 2017, an initiative that encourages women to hit the Scottish trails after acquiring the necessary skills to do so.

Female solo travel is as common as it is contested—nowadays, women explore the world by themselves in large numbers. Many of them document their journeys on social media or blogs, encouraging more women to pack their bags and follow in their footsteps. Only when news hits of a woman being harmed while traveling alone do headlines question the safety of what’s become a global movement.

What was she wearing? Was she drinking? Talking to strangers? Why was she by herself?

Matters of consent and normalized violence against women give way to blaming the victim for daring to venture out into the world alone.

Considering the prevalence of this perspective, women who hike alone are even more controversial. Solitude in the backcountry, far from phone reception or the safety of crowds, threatens greater vulnerability. Yet solo hiking—like solo travel—is gaining momentum among women. Numerous platforms and businesses now offer gender-specific advice, training, and encouragement. They feature inspiring outdoor stories, conjure inspiration, and spread risk awareness. More women than ever before are taking to the trails and pushing the social boundaries of solo adventure travel in the process.

“Female participation in the outdoors has grown considerably since I started climbing in the mountains in the 1970s,” says Girls On Hills co-founder Nancy Kennedy, who began racing and trail running just a few weeks before her 50th birthday. Her partner Keri Wallace agrees, sharing that she sees “a lot more women out walking and running in the hills” compared to when she first started out.

Scotland is a hiker’s paradise. From the rolling hills of the Scottish Borders to the towering peaks in the north-western Highlands, there are trails that crisscross every which way, offering challenge and tranquillity for walkers of all levels. Yet for many women, Scotland’s sweeping topography feels inaccessible. Not all barriers are gender-specific; some aspiring hikers lack the time or the funds, others are intimidated by the physical challenges of such an adventure. The mental hurdles, however, are perhaps highest for women.

“We realized that a lot of women lack the confidence to run and explore independently in the hills,” Wallace states. “Many ladies are nervous for their safety, nervous about other [hikers], about weather or getting lost. We see a lot of low confidence navigation skills in particular.”

At a conference for Scottish outdoor tourism businesses, British explorer Alastair Humphreys gave a keynote speech and listed off some of the blockades people face when trying to spend more time outdoors. One of the most common reasons he encountered was gender—more specifically, being a woman. But why is it that women are so fearful?

The outdoor community is a male-dominated space. Search keywords like ‘adventurer’ and ‘hiker,’ visit the outdoor section of your local bookstore, research the line-up of speakers at outdoor events, or the protagonists of adventure documentaries. Women in these roles are few and far between, without the communal confidence that emerges from strength in numbers.

Like in any other male-dominated sphere, change neither comes easily or happens overnight. From the entertainment industry to academia, politics to public service, the #MeToo movement has uncovered the inequity, the double-standards, and the abuses of people and power across industries and societies. The outdoor community is no exception. A 2018 study by the American Alpine Club found that 47 percent of surveyed women had experienced some form of sexual assault or harassment—from cat-calling to rape—during a climbing activity. Personal accounts of bullying, abuse, and threatening in the long-distance hiking community have surfaced too.

As for Scotland, Wallace and Kennedy tell me that they have never had any bad experiences themselves, especially not in the hills. But Wallace acknowledges, “I know women in the climbing and mountaineering disciplines who have had to endure comments such as, ‘does your husband know you’re out here?’ and incredulous remarks of, “are you girls out by yourself?” Condescending micro-aggressions like these can be intimidating enough to push women into following, rather than leading.

To fight issues of confidence among local women in Scotland and encourage more solo adventures, Girls on Hills started offering guided trail-running courses and navigation training in the Highlands. “We want women to enjoy the simple freedom that comes with trail running, but also to feel empowered through learning and confident in their own ability–and to take that inner-strength with them into the rest of their lives,” Wallace continues. “Some women feel more confident about speaking up, participating and taking the lead in this setting.”

Having participated in one of their navigation courses myself, I can only agree. As much as I love hiking with friends regardless of gender, I’ve noticed myself assuming a follower’s position when a man leads the group. It wasn’t until I began hiking by myself more frequently that I realized—even as a life-long hiker—I had never learned the skills to go out safely on my own.

Safety is a big concern for female adventurers, yet statistically, it’s safer to travel the world by yourself than to live with an intimate partner. The World Health Organization reported that as many as 38 percent of murdered women have been killed by their own partner. So, it’s puzzling that the focus of women’s safety rests on activities that foster strength, confidence, and independence.

I ask Wallace and Kennedy to describe how it feels when they’re in the great outdoors. “It feels like I’m a little bit closer to being a ‘human animal’ in its natural environment, away from the trappings and artificial constructs of towns, cities, and society,” says Wallace. Kennedy adds that she finds “wild places to be inspiring, reflective, energizing, calming and even spiritual…This well-being or sense of being recharged carries over into daily life, equipping me to deal with the everyday.”

Countless studies have found that spending time outdoors and staying active has a plethora of positive effects on both the human body and the psyche. It boosts your immune system, increases creativity, restores your focus, and exposes you to essential vitamin D. Doctors on the Shetland Islands north of mainland Scotland go as far as to prescribe outdoor time for a variety of ills and pains.

Women from all walks of life have participated in Girls On Hills trail runs and navigation courses, and have shared the benefits of doing so. “We have met so many women who have experienced hardship in their lives, and came to running as a way of escaping and healing themselves. We have heard some inspirational tales of recovery and ‘come-backs’,” Wallace says. Their stories can inspire other women to mobilize and increase their visibility and representation in the hiking space.

That said, there is a need for attainable role models. While platforms might share women’s epic adventure stories, their protagonists appear to be outliers—women who are born overachievers. And while their fantastic expeditions are inspiring, their stories can also be intimidating to those who are starting out. That’s why Girls on Hills’ approach to learning in gender-specific environments and groups is so important. Having relatable role models is a crucial step towards feasible goal setting in the outdoors.

It is equally important that women become teachers, guides, entrepreneurs. At the aforementioned conference for Scottish outdoor tourism businesses, there were eight men invited to speak on stage – some of them twice as both keynote speakers and in round-table discussions – but only one woman. Wallace asserts, “in terms of being outdoors hiking, cycling or swimming, we are seeing more and more women exploring independently and enjoying an outdoor lifestyle. In terms of women working in the outdoor community, I think there is still a great deal of change that needs to happen.”

As in many other industries, a change in traditional childcare roles might “enable more women to operate full time in the outdoor sector,” suggests Kennedy. However, she also adds that there is now “more structure, coaching, role models and career pathways enabling women to venture forth on their own.”

The outdoor communities in Scotland—and other nations—have a long way to go. Organizations like Girls on Hills, and role models like Wallace and Kennedy are essential to this development. Their passion to empower and encourage women is informed by a deep understanding of the benefits of adventuring; as such, they are dismantling the roadblocks that keep women from the outdoors.

“We feel that we are really making a difference within the women’s running community in Scotland and the UK,” the duo behind Girls on Hills concludes. “We help introduce women who love to run and walk to the concept of independent exploration and adventure.” 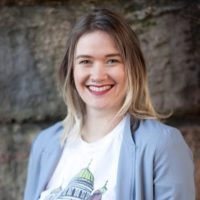 Kathi Kamleitner is a writer, researcher and co-founder of the Glasgow-based feminist film festival Femspectives. She was drawn to Scotland by her passion for the outdoors and a promise of adventure in the Scottish Highlands. Following a PhD about women's film festivals at the University of Glasgow, Kathi is currently focussing on her Scotland travel blog WatchMeSee.com which aims to inspire people to travel and hike in Scotland, especially other women. You can find her at @watchmesee.

« What it’s Like to Travel as a Transgender Person
Photo Essay: The Power of What Unites Women »