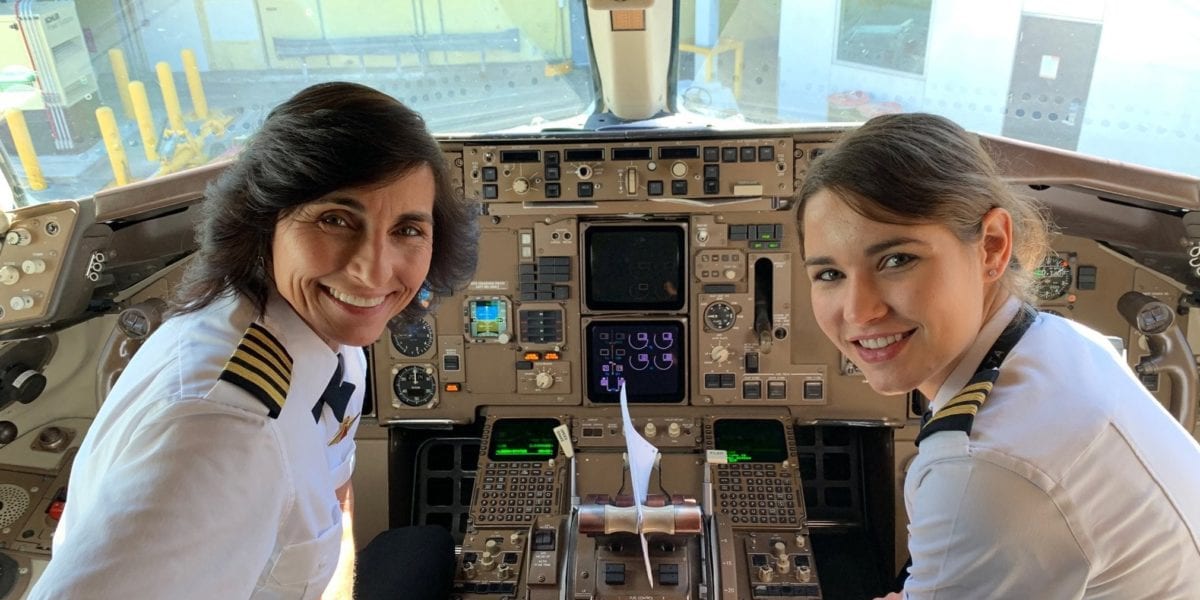 Aviation—like much of the travel industry—remains a male-dominated space. Even in 2019, female pilots still only account for an estimated 4.4 percent (or 6,994) of commercial pilots in the US and UK, according to the Centre for Aviation. Recently, aviation history was made when passenger Dr. John Watrel learned that the duo piloting his Delta Boeing 757 flight was in fact a mother and daughter.

Captain Wendy Rexon and her first-officer daughter, Kelly Rexon, are the first mother and daughter pair in history to pilot a commercial flight together. As it ends up, flying is a family business when it comes to the Rexons. Wendy and her two daughter are airline pilots along with Wendy’s husband, who is a pilot for American Airlines.

“We would run around in [our parent’s] captain hats and have fun as little kids and go on their trips with them,” Kelly reminisced to ABC News. “It was definitely part of the family business. I started flying when I was 16, and I had the pleasure of being [my younger sister’s] instructor and she was my first student.”

Wendy and daughter, Kelly Rexon, first flew together on a flight out of New York’s JFK airport. Their first flight proved eventful as the pair was confronted with smokes and fumes in the cockpit.

Despite unforeseen complications, the women landed the flight safely in Los Angeles in what would be Wendy’s first time witnessing her daughter handle an emergency landing. “She was fantastic,” Wendy recalled. “It was a difficult situation that was made easier because of [Kelly’s] training and because of her competence.”

Although the aviation industry is largely ruled by men, the past decade has seen a steady (albeit slow) rise in women becoming pilots. The number of women holding Federal Aviation Administration (FAA) student pilot certificates has doubled over the past decade. As of December 2017, a total of 42,694 women hold active pilot certificates—including commercial and private pilots—which translates to 7 percent of all pilots according to the FAA. Female commercial pilots have also increased 19 percent over the past decade.

The rise in female pilots is a result of major airlines placing an emphasis on bringing women into the cockpit. Special programs, such as Delta’s Women Inspiring our Next Generation (WING) program, aim to close the gender gap in aviation by encouraging young women to become pilots. In 2018, Delta flew girls from its WING program on what would be the first flight where everyone—from crew to pilots to gate agents to flight dispatchers—were women.

Despite the promising shift in the aviation industry, there is a long way to go until the gender gap is firmly closed. “At American Airlines, 4.8 percent of the pilot staff is female. At Delta, it’s 5 percent. It’s 7 percent at United,” reports Jane Wells for CNBC. “By comparison, at least 10 percent of pilots at the eight major airlines in India are female, according to a report by the BBC.”

Surprisingly, many young girls are not aware that becoming a pilot is a career path available to them. It is this very notion that major airlines are trying to fight by targeting young girls with pilot programs. It also for this very reason that it is so important to celebrate women, like Wendy and Kelly Rexon, to give future generations female role models in aviation.