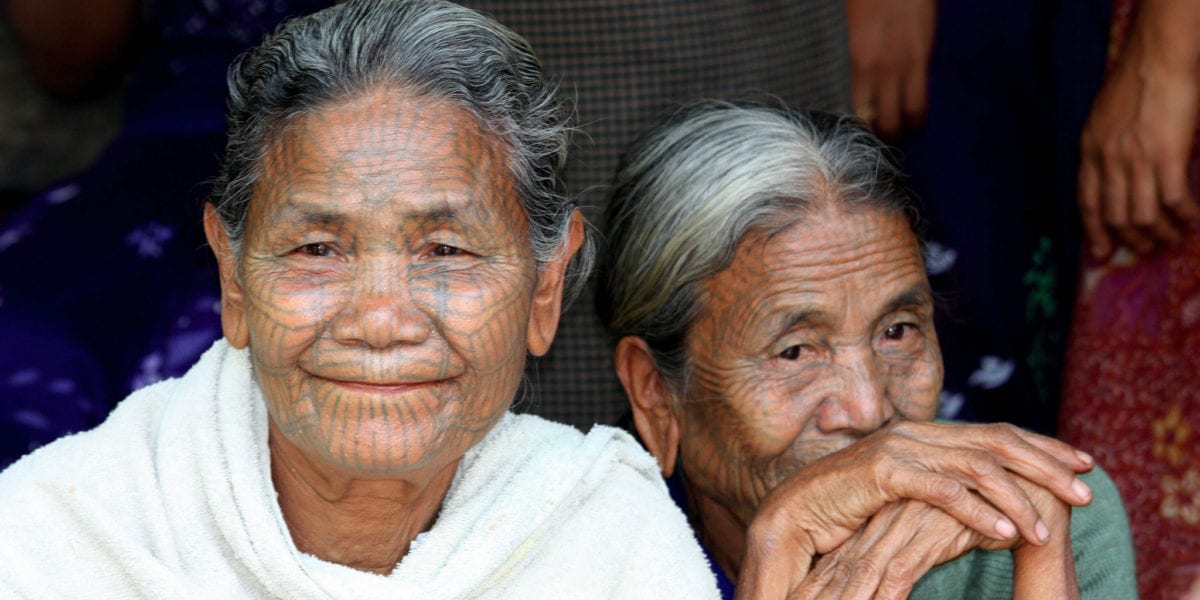 The Chin State Women and their face tattoos | © dany13/Flickr

“Why would you travel all this way just to meet us?”

This question was posed to me on the floor of a hut in Myanmar in the remote Chin State region, a mountainous part of the country near the Bangladeshi border. The Chin people are thought to have originally descended from Mongolia. Although isolated and difficult to get to, the Chin State has become renowned because of the local women and their remarkable face tattoos.

Intricate, black ink designs adorn the women of this community, covering their face in its entirety. The tattoos reportedly date back to the 11th century where, according to legend, the Burmese King stumbled across the Chin State women and became mesmerized by their beauty. As the story goes, the King kidnapped one of the women to take as his bride. In an effort to protect their daughters, the mothers began tattooing their faces to make them “unattractive” to the King, should he return.

Another version of the legend says that the King’s kidnapped bride managed to escape her royal captor by cutting her face to disguise herself on the trek back home. To honor her, future women of the tribe started tattooing the same marks on their own faces. While the stories behind the Chin State women’s tattoos are enchanting, another simple explanation attributes the face tattoos to tribe distinction. Today there are 60 different clans that make up the Chin minority. Of these various clans, it is the M’uun women whose tattoos prove most recognizable due to their P” or “D” shapes on their faces and “Y” symbols on their foreheads. Although these women have different stories about how the face tattoo tradition began, they all agree on one thing: it hurt.

The ink and needles used for the Chin State women’s tattoos are all derived from nature. The tattoos use leaves for color, soot as a disinfectant, and grass shoots as a natural bandage for healing. The women use thorns from cane plants as the tattoo needle, then heat the bark from pine trees and capture the smoke in a mud pot, mixed with various leaves, to create the ink. The tattoo process itself, all depends on each girl’s pain threshold and could last several days, followed by several days for healing.

While the history and traditions surrounding the Chin State are fascinating, they are quickly becoming lost to time. In the 1960s, the Burmese socialist government discovered what was happening in Chin State and banned the practice of face tattoos. The ban was part of a larger government effort to rid the country of old traditions and usher in a new era of modernization. The Chin State women of today are the last of the face tattoo tradition. Once they are gone, the tradition and history of Chin State tattoos will go with them.

Much like the story of how it all began, many of the Chin State women tell me they feel conflicted about how their tradition will end. Some believe the face tattoo practice should continue, while others believe the women of today should be allowed to decide. Through a translator, I asked some of the women about the older generations of their community. What were their mothers and grandmothers like? “Strong. Nurturing. Brave,” they told us. The women of Chin State’s past worked on their land, cooked meals, raised children and cared for their families. Whatever the fate of the Chin State tattoo tradition, the beauty and strength of these women goes far beyond the lines drawn on their faces.

Megan is a freelance journalist, activist and full-time adventurer. She left San Francisco and her job at CBS for life on the road in 2017. She loves introducing readers to different cultures, one-of-a-kind experiences and badass women around the globe. When she’s not writing or stuffing her face with street meat, she’s leading trips for inspiring women at EmpowHERed Travels. You can follow her journey on IG @itsacheekylife