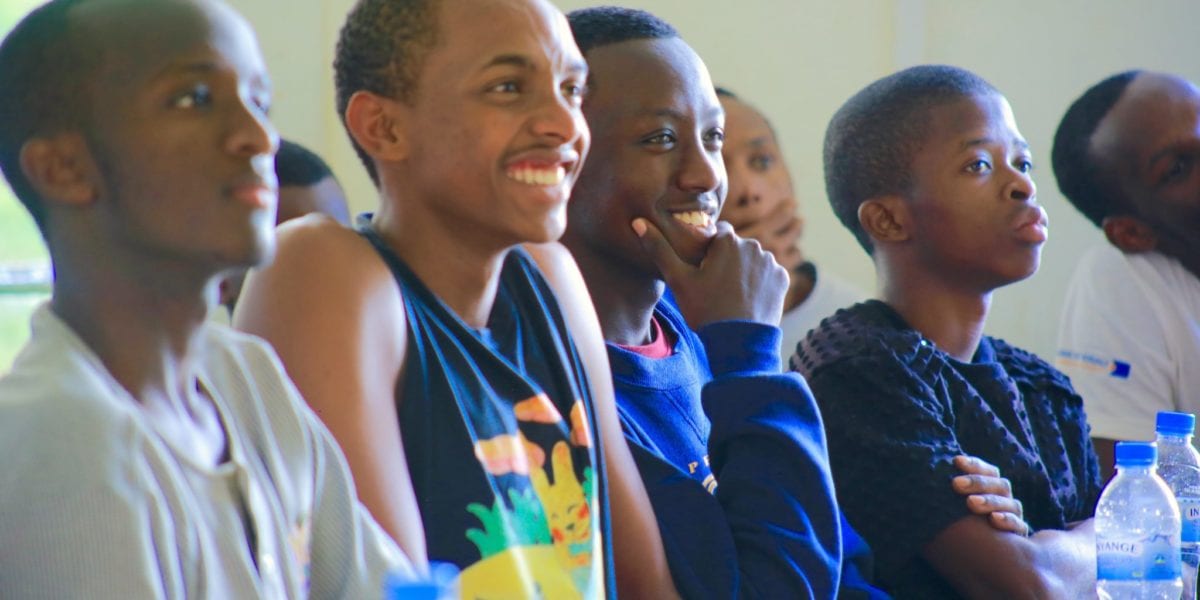 The first thing that strikes you about Katie Carlson is her vocality, which stems from her passion about what she stands for: women’s and girls’ rights. She loves planting the flag of feminism on the ground when she introduces herself because she never feels that her confidence is dependent on other people’s validation. Katie, the founder of Paper Crown Institute, a Rwandan NGO that works with youth to transform gender norms and create lasting social change, is a feminist activist and an international gender specialist with a focus on the Rwandan context.

We spent many hours together because talking about gender is like opening Pandora’s box of all kind of socio-economic-related issues. Here’s a non-filter conversation about men’s time to understand that feminism is not about them—it’s about women’s right to take the front seat.

Unearth Women (UW): How did your international feminist journey begin?

Katie Carlson (KC): In 2001, I was doing my BA in Film Production, and my interest was in the arts and media, but for one of my elective subjects I selected Women Studies. The first feminist book I ever read was Feminism Is for Everybody by Bell Hooks—a black, queer feminist, who is also involved in politics and racial inequality activism. Until today, I believe this is the perfect introductory book for anyone who wants to understand feminism. I have a lot of respect for it because it opens your eyes to social responsibility, and questions one’s role not only as a male or female but as a whole system.

After I got into feminism, I started learning more about it and leveling myself up professionally. Unfortunately, we didn’t have Facebook then, so it was much more time and labor intensive to find resources and participate in feminist action.

UW: When did you arrive in Rwanda?

KC: I first came to Rwanda in 2011 for my Master’s Degree thesis, which was a comparative study of the evolution of women’s meaningful equality  in Rwanda and South Africa, post-1994. I have been here for over eight years now, mainly thanks to the sense of growth and constant push for development that the country stands for.

UW: In 2014, you founded Paper Crown Institute, a Rwandan NGO. Tell us about your mission.

KC: I wanted to engage adolescent girls and lay a foundation to enable them to navigate issues such as discrimination, sexual harassment, and violence, among other things. I designed a gender and leadership workshop to raise awareness about the fundamentals. Sweeping floors, for example, isn’t written in women’s DNA, it’s a social construction that has nothing to do with one’s sex.

In our workshops, we don’t use powerpoint, high-level language, and slick jargon. Instead, we have natural participatory discussions. We foster critical thinking, and we contextualize everything for Rwanda. We want to help girls find the language to name the issues they are facing, as we often hear them say things like: “I thought these things were normal; when a boy harasses me on the street. Even though it makes me uncomfortable. But now that I know it’s not, it makes me feel like I can do something about it.”

When we talk about leadership, we want to pull out a sense of awareness that everything they have experienced in life until now, and every original thought they have had is valuable. We provoke girls to think about who they are as individuals and what values they admire within those who inspire them. We want them to find ways to use their self-development to influence others positively. It’s not about becoming a “boss,” but about collaborating with others towards a common goal. Because if we are teaching everyone to be leaders, where’s the team? So, we train them in a holistic approach, which emphasizes emotional intelligence and how one’s biases and judgments may affect others.

Our approach goes beyond acknowledging gender inequality. Our primary focus is transforming the power dynamics that drive gender discrimination and violence. Acknowledging emotional violence is one thing, but it’s a whole different level recognizing that you have the right not to be put through it.

UW: What gaps does the Paper Crown Institute fill in Rwanda?

KC: Rwanda fixates a lot on national development in its narrative around gender equality. However, while there’s the aspiration to get more women in top management and leadership roles, the majority of these women do not necessarily understand gender issues and drivers on a deeper level. We don’t see many women in leadership at the grassroots levels—not because they don’t believe they can get there, but because they have been taught that they don’t have what it takes or because they spend all their time taking care of their families.

Women already in positions of high influence will make a real impact when they start thinking about how to change dysfunctional or damaging power dynamics. Then, as a society, we can expect to  see socio-economic development outcomes such as improved performance for girls in education and a decrease in teen pregnancies.

If you have a society where men and women are considered equal players with equal skills, equal value, equal respect, equal treatment, equal access to opportunities, you will be driving the development car much faster. But to get there? We have to move beyond tokenism.

UW: In your workshops, you call feminism the “F” word. Why are people nervous about feminism?

KC: Because they don’t understand it. Fem- refers to the “feminine” as a word, but feminism as a movement isn’t just about women who want to become CEOs. It’s about power dynamics between genders and even those who are non-gender-conforming. However, if we say let’s be “humanist” instead, we aren’t having a conversation about women, who deserve to be prioritized. We are then having a conversation about everyone! We are then erasing the nuance of women’s experiences and the nuance of the power dynamics that drive the entire problem of gender discrimination and violence. But if we don’t understand that nuance, we cannot fix the problem. So, using the word “feminism” does not only allow women and everyone else to acknowledge that the problem is based on gendered power dynamics, but it also highlights that the root cause of the problem relates to both men and women and the specific power dynamics between them.

UW: What is the relation between gender and race?

KC: Gender and race are two of the most dominant categories that affect every single person, and which everyone can relate to by some metric, whether positive or negative. Race and gender massively define how we move through the world and how people treat us. For example, I am subordinated as a woman, but I am dominant as a white person. I cannot be an activist if I don’t think about how other variables of my identity (race as one, but also class, disability, sexual orientation, etc.) are either giving me an advantage or a disadvantage. As a feminist, at the core of everything I do is the need to continually be thinking critically about systems and structures of power and how they either hurt or help people in different ways.

UW: What makes a good feminist?

KC: I think you cannot be a feminist if you don’t think critically about your environment and interactions with people. Yes, you may be a woman, but not all women face the same levels of discrimination. This is intersectionality. For example, during my interaction with people of different age, sex, education, and social background, I am vigilant about being conscious of how I engage with that person so as not to do or say things that might perpetuate negative or harmful stereotypes based in power dynamics, which may make the other person feel judged or inferior to me.

A good male feminist is someone who invites women to speak. He does not just sit there thinking: “Women are not leaders because they don’t say anything,” or “women don’t mind the way things are.” It’s up to him to make space for women’s voices, to listen, and then to act and become better.

UW: What advice do you have for the youth?

KC: Have an intellectual curiosity and respect for something that has had a profound positive impact on the entire world, and learn about it from unbiased sources. Don’t just make claims. Don’t make it other people’s job to teach you about feminism and gender issues; go out and educate yourself.

Also, always reflect on your blind spots and biases, especially if you are holding a high position, and other people depend on you or look up to you. In feminism, everybody’s voice and opinion counts, and you make decisions with others based on mutual respect. As a girl, don’t stay quiet to keep people happy. Try things, and fail, and become comfortable with failing—this is how you build confidence.

In a loving relationship, if the power dynamics between you and your partner are truly equal and you are both aware of them, and you talk about them, and you don’t just follow cultural expectations, you can do whatever you want between the two of you, as long as you both feel comfortable. Caring and having a fulfilling relationship doesn’t in any way have to be gendered for it to work.

And read! Read Bell Hooks, Gloria Steinem, Betty Friedan, Angela Davis, Toni Morrison, but also read the work of anti-racism activists and LGBTQ+ allies, anti-discrimination activists for people with disabilities and the poor, because the principles of these movements are aligned with feminist thinking and you need to understand them holistically for your activism to be as meaningful and inclusive as it can be. 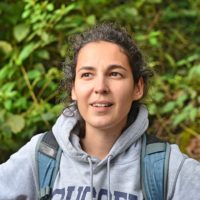 Maria Iotova is a freelance journalist for the travel, development, and news sectors. Among others, she has written for the Huffington Post, the Culture Trip, and the Financial Times. After intensively exploring her home country of Greece and the UK as a journalism graduate, her obsession with unearthing stories took her to Ghana where she worked for The Daily Graphic. Ever since, with her husband and dog, she has lived in South Korea, Mauritius, and currently in Rwanda doing what she loves the most: getting out of her comfort zone.