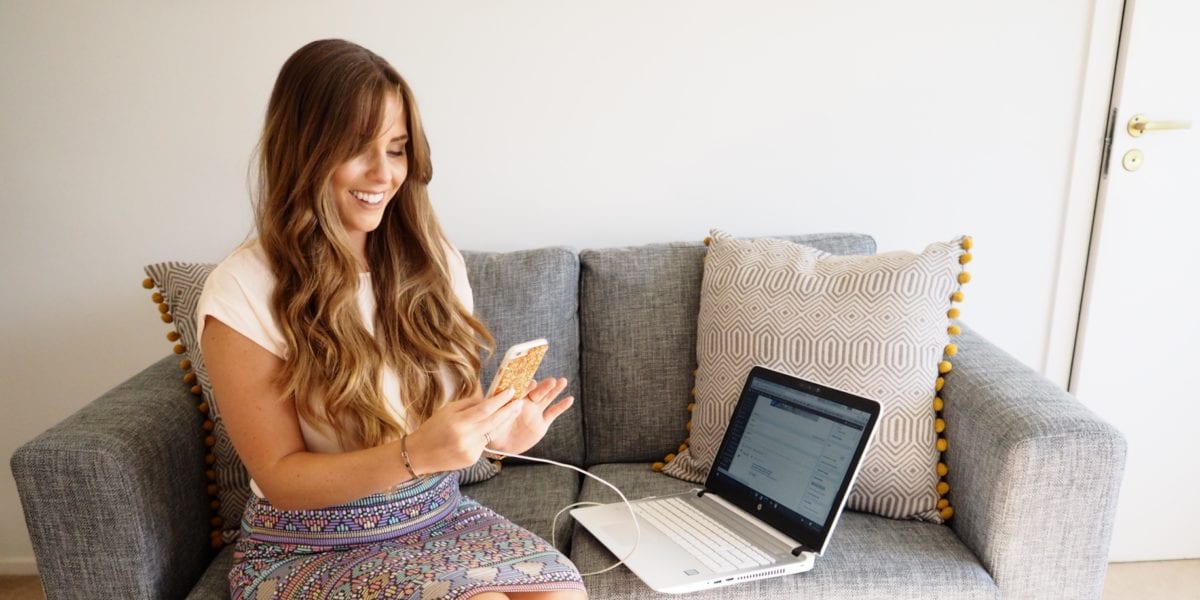 Amelia Goodhead, a leading travel and lifestyle blogger in the UK, wears many hats. After nearly two decades into her blog, , and three years as a career blogger and YouTuber, she’s recently launched an entirely new property, Bloom From the Darkness (BFTD), which is devoted to body positivity, motivation, and inspiration. In an interview with Unearth Women’s staff writer Jenna Kunze, Goodhead spoke about the impetus for her new brand, components of the interactive website, and her personal ideas on body image in a world of social media.

Unearth Women (UW): You began your lifestyle blog, , in 2009. Now, nearly two decades later, you’ve launched your new company, Bloom From the Darkness. How did your first business inspire this new one?

Amelia Goodhead (AG): Before , I’d never owned a business before and I didn’t start to be a business. It was simply a place for me to share my thoughts and photos in a creative outlet. So when it became a viable business venture and eventually my career, it was a shock and a dream come true!

Having owned xameliax as a business for the last three years, it seemed like starting something fresh was a natural progression. I love to be busy and enjoy a challenge. Xameliax made the thought of starting a new business a lot less daunting. I’d done it before, I can do this again! I had so much knowledge about the logistics, the design, and the structure, so it made things a lot easier.

UW: Can you give readers background on your own personal darkness, and how an online community helped you bloom from that experience?

AG: Long story short—because it’s a story I’ve told so many times (which certainly helps with healing I, might add)—I found out two days after he proposed that my fiancé of three years was having multiple affairs. I’d told the entire world that we were engaged and how happy I was, so it was traumatic and also mortifying when it all came tumbling down.

For a couple of months, I hid away as I started to heal. The women he was cheating with followed me and watched my videos, so I felt isolated in every aspect of my life and job. But one day I decided to switch on my camera and start writing again. I thought that maybe I could help others going through the same to feel less alone. The messages flooded in and everyone was so supportive, which helped build my confidence online back up, being surrounded by those who cared so much.

A year later I was plunged into a depression that completely blindsided me. I thought I was healing so well, but my mind thought differently. Dealing with my anxiety and depression during that time was harder than the breakup for me and took a lot of strength. Again, I spoke about my journey online in the hope it would help others and to help destroy the stigma around mental health struggles, medication, and therapy. I felt less alone, as did those who were watching and healing with me.

UW: Can you talk about unique components of BFTD’s interface, like the forum, playlist, and links to help centers?

AG: We have a forum where anyone can register to chat about anything in their world, happy or sad. It’s supported by other users and real people out there going through the same things. It’s a supportive and happy place powered by users. The playlist is a real mix of old and new songs to uplift you on any day of the week! Stick it on and dance around your kitchen as you’re washing up, in the car on the way back from a stressful day at work or at home to cheer you up after a hard week. Music is a great release and can really lift a mood, especially if you sing along as loud as you can!

We also have articles written by our users either with their names or anonymously. They’re therapy for the writer and therapy for the reader. If there’s an article talking about critical issues such as suicide then we put helpline numbers in case they are triggering for people. People’s stories are incredible and I’m honored to give them a platform.

UW: Can you talk about the transformation you went through in the way you regard body image?

AG: I think for me this is an ever-changing answer. Society has molded so many of us into thinking we should always be on a diet or striving for more. Maintaining or gaining weight seems to be quite a negative thing. I’ve never been happy with my body. I can remember a time back in 2013 when I discovered kickboxing, where I looked in the mirror and felt good about it for the first time. I felt amazing, but even looking back now that was mostly because I was quite slim.

Now, things just feel a little different. I’m on the heavier side of my personal weight spectrum, yet I feel the most confident I’ve ever felt. I’m not sure if it’s age or simply just accepting my body for what it is with my lifestyle (which I love), but I’m happy. Last year, I had a back injury which left me unable to walk for a little while and I think that also played a part; I love my body because it healed because it moves now like it couldn’t move last year. It may be a little wobblier, but it works, and I’m so grateful for that. Some days I think I have hangups, that’s just life, but I’m just kinder to myself in so many ways now, and it’s an incredibly freeing.

UW: You made international headlines in 2016 for your #JustAsIAm movement, where you posted an unedited photo of yourself in a bikini, next to one of you slimmed and toned using an application, to show viewers how unrealistic social media can be. How does BFTD aim to combat the same message of social media often glorifying other’s lives?

AG: Simply by sharing people’s stories in raw and honest ways. Shining a light on tough times helps to normalize these struggles we all feel at some point. Unless we start to openly talk about these things, they will forever be hidden from view, just like the sneaky photoshop tricks some use. We need to talk, to explore, to share, and just expose the truth about all these issues. Not to cause headlines or a stir, but just to shine a light on them so that someone in the dark might be able to come forward.

UW: Where do you get the ideas and inspiration for topics you explore on BFTD?

AG: Honestly, a lot, if not all of my content comes from my life. I have a complicated mind which tends to delve into a lot of things, so if I have an idea I want to explore then I tend to write it, and sometimes it forms itself into a blog! I also do a lot of fun stuff. I LOVE to discover and try new things! So I write about that, too. Sometimes followers ask for certain things, but often I just like to share the normality of life to both inspire people and also help them feel less alone. That’s the beauty of Youtube and a blog isn’t it? A chance to have a snapshot into someone’s everyday life, which is often attainable and relatable. I think that’s good for people’s mental health to see, especially when there’s so much fakery online.

UW: You’ve chosen to donate a percentage of your funds from the BFTD online shop to support a mental health charity. What inspired that decision?

AG: I came up with the idea earlier this year to create a t-shirt that has a symbol that could help people, that I could sell for charity, which is where I designed and came up with the name and logo for BFTD. The logo is a lotus flower, which has the ability to grow and bloom from muddy dark pond bottoms. I wanted to give something back to charities who help de-stigmatize and help with the mental health issues people all round the world are dealing with. Ultimately, I decided to go further and framed the entire website and business around this. So the profits from that original t-shirt will forever go to mental health charities, along with a percentage of everything else in the shop, all designed to remind people how strong they are every single day.

UW: What other tips do you have for people struggling with mental health?

AG: Reach out and talk to someone. Be that a friend, a family member, the samaritans or someone on the BFTD forum/the internet. If you can’t talk to anyone else then talk out loud to yourself or write down your thoughts. Work hard to find out your triggers and what soothes you. Most of all, remember that tomorrow is another day.