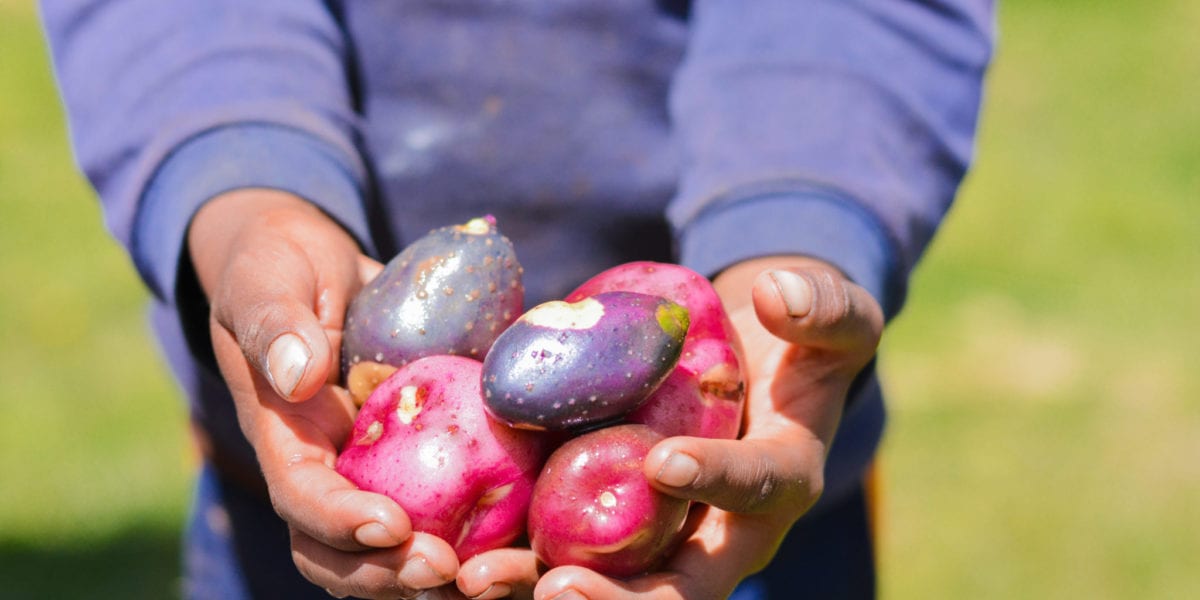 Chef Lois Ellen Frank believes understanding our history might change more than our minds— it might change the way we eat. Chef Frank, born in New York to a Jewish father and Native American mother, has been working to revitalize Native American foods and traditions since the late 1980s. In 2003, she became the first Native American chef to be awarded a James Beard award—a prestigious culinary honor— for her research on Native American cuisine in the Southwest.

She has since worked as a culinary ambassador for the U.S. State Department, earned a PhD in culinary anthropology focusing on Native American cuisine, and spearheaded her own catering business to reclaim Native American health through food.

Unearth Women (UW): Introduce yourself, and your mission as a Native American chef and culinary anthropologist.

One of the primary focuses at Red Mesa is to use ancestral ingredients and techniques in a modern kitchen. I work with doctors, nurse practitioners, dietitians, and nutritionists to reverse Type II diabetes while reclaiming an Ancestral Native American diet.

UW: Growing up on Long Island to a Jewish father and Kiowa Nation mother, what drew you to your Native American roots?

LEF: My mother always instilled in her children the Native part of who we were. She always had a garden. She believed everything was and is connected and talked about the circle of life.  I use that metaphor a lot now when I teach about food and health and wellness.

She put our kitchen scraps under the straw in the garden long before composting was the cool thing to do. Eggshells, onion skins, carrot peelings, anything that would breakdown and return back to the earth, she saved it all. She encouraged our ideological perspectives to be all-inclusive and, now that I am middle-aged, I call this a very Native way of being in the world.

UW: What are the biggest misconceptions about Native American cuisine?

LEF: Most people don’t know that many of the foods that we eat every day were given to the world by Native People. For instance, what I call the magic eight are eight foods that did not exist anywhere in the world outside of the Americas in 1491. These foods include corn, beans, squash, chiles, tomatoes, potatoes, vanilla, and cacao.

If we deconstruct that these foods were inherently native, then that means that the Italians didn’t have the tomato, the Irish didn’t have the potato, half the British National Dish—Fish and Chips—didn’t exist. The Russians didn’t have the potato, nor did they have vodka from the potato. There were no chiles in any Asian cuisine anywhere in the world, nor were there any chiles in any East Indian cuisine dishes, including curries. And the French had no confection using either vanilla or chocolate. So the Old World was a completely different place.

UW: You have called the history that Americans learn in school— that Christopher Columbus discovered America— “erroneous.” Why is knowing our history as a nation so important, even to the way we eat?

LEF: It’s erroneous because it’s not entirely accurate. Much of the history in the United States involving Native people is not a happy story. It’s more a story of resilience. It’s a story of survival. It’s a story of recovery and revitalization of Native American foods and culture.

UW: Can you elaborate on those four distinct categories of Native American cuisine, and how you have identified those groupings and their trademarks?

LEF: There are four food groups that make up Native American cuisine today. These include the Native Ancestral foods, which are both cultivated and wild that were used by Native People pre-contact and are now labeled as coming from the Pre-Contact Period. These might include the Magic Eight, all types of wild greens, cacti, wild fruits, wild rice, medicinal plants, and wild game.

The third category, comes from foods distributed during forced relocation of Native Peoples onto reservations, and with many tribes, forced relocation away from their Ancestral homelands. The government distributed commodity foods, (rations that were handed out, usually twice a month). These included flour, lard, sugar, coffee, and the infamous canned meat we now know as spam. These rations were originally intended as a temporary fix for forced relocation and displaced Native people, but became staples, and which we now see as contributing to the health disparities, that native community members face today. This period, I call the Government Issue Period, and it is the period during which frybread and the iconic Indian Taco was born.

The last period, where we are now, I call the New Native American cuisine. This period, shares components from the three previous categories that may be innovatively combined or “fused” into a new Native American cuisine.  Native communities for the first time in history are defining what these foods are in their own communities, which differ by ecological zones or regions, and what foods from each category they want to include in their diet for their community’s health and wellness. For me, this period is so exciting.

UW: How did the “contact” period of colonization impact Native Americans health for generations to come? How does your work address this?

LEF: I believe the Government Issue period created the health disparities we see today, like high rates of diabetes among Native American populations. That is the period that frybread was born from with the introduction of sugar, flour, lard, milk powder, and then additional processed foods.

Frybread is a very complicated food for me. It represents survival. If the ancestors had not created this bread, they might have starved. Yet, frybread is not healthy food and I can’t and don’t eat it every day. For some it is a comfort food, for others including some chefs and some Native community members, it represents colonization and a period or time in history that is traumatic. Many choose not to eat it anymore, and other people still eat it but not as often as perhaps they once did in the past.

While I can create menus based on the research that I conducted for my doctoral dissertation work, I choose not to prepare a lot of foods from the Government Issue period. I like to create menus and foods primarily from the Pre-Contact Period, as these are very healthy food and promote health and wellness. I also use some foods from the First-Contact Period that I weave together with Pre-Contact foods.

UW: How are you working to revitalize Native American cuisine?

LEF: I work with Native Communities all over the United States. We teach Native community members, educators, cooks, health representatives, and diabetes educators how to cook simple, clean, nutritious and delicious foods for health and wellness. This is one way we help to revitalize Native American foods, foodways, and cuisine.

We also have done a kids camp for many years where we teach Native kids ages 5 to 14 how to cook a variety of dishes. This not only teaches kids how to cook, it embeds the importance of these foods and empowers children with skills on how to cook Native American dishes for health and wellness.

UW: As a U.S. culinary ambassador from Ukraine to Italy, you have presented American cuisine to foreign countries. What has been the reception?

LEF: I think the biggest thing that comes out of these trips is learning that we are much more alike than we are different. In all of the locations we have been to, we bring in some of our ingredients— for example blue corn meal— and create a dish that is uniquely ours introducing something the people may not have tasted with ingredients from the local area we are visiting.

In St. Petersburg, Russia, probably the biggest thing was feeding the Russian diplomats and guests at the Ambassador’s residence their first-ever tamale.  Through translation, we had to tell them not to eat the outside cornhusk (how would you know this if you’ve never eaten a tamale) and they loved it. It was such a great feeling to share foods with the diplomats, writers, business owners, cooking school students, and chefs from local restaurants. It was a wonderful form of cultural exchange and that’s what culinary diplomacy is, diplomacy through food.

UW: As a Native American woman in a career monopolized by men, have you encountered any push back?

LEF: I always think of the movie Julie and Julia, where Julia Childs goes home to practice cutting onions so that she can match the way the men in her class cut onions and she can do it as quickly as they can, if not quicker. It’s hard on women, but more and more kitchens have both genders now and I really like that.

I have been in kitchens with ratios ranging from 2:1 to 20:1 of men to women. Some of it is because the profession of cooking is very hard physically, and very demanding. I don’t think being a Native American woman, per se, is the issue, it’s just being a woman in a commercial kitchen.

UW: How can Americans get in touch with and support Native American cuisine in their region?