The 1st Black, Female Team to Row Across An Ocean 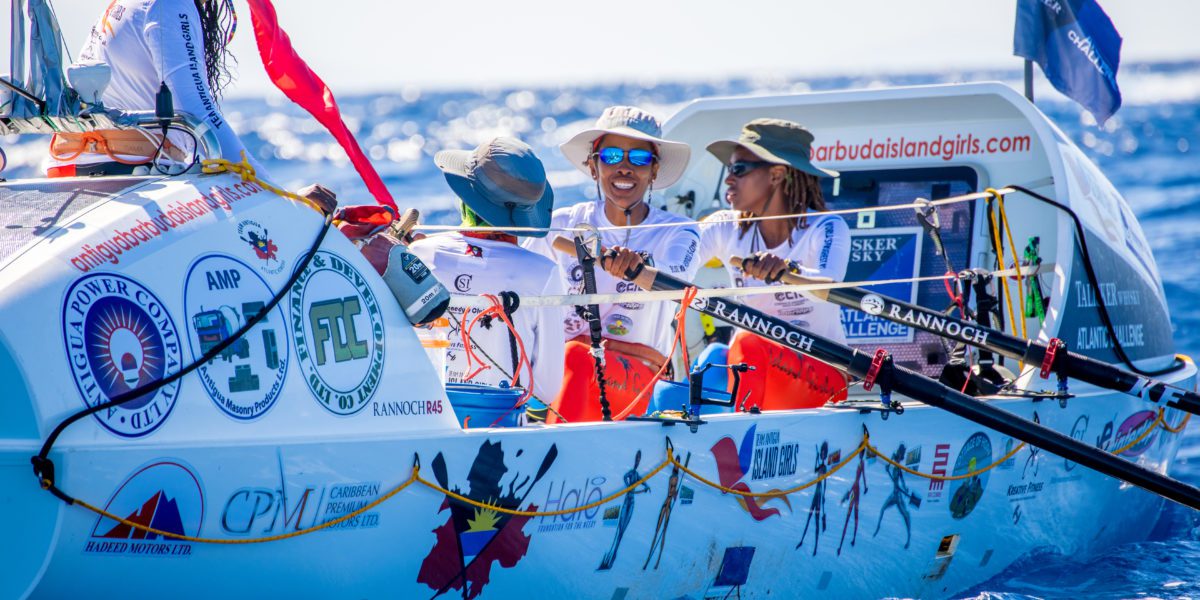 On Monday January 28th, 2019, four women from Antigua & Barbuda became the first all-female, all-Black team to row across an ocean. Kevinia Francis, Samara Emmanuel, Christal Clashing and Elvira Bell spent 47 days, 8 hours and 25 minutes rowing 3,000 nautical miles to make history in the Talisker Whisky Atlantic Challenge while raising funds for a local charity, Cottage of Hope. Here, we speak with this team of incredible women who broke barriers, overcame hurdles at sea, and healed intergenerational pain while traveling what was once the Trans-Atlantic Slave Trade route.

Unearth Women (UW): What is the Talisker Whisky Atlantic Challenge?

Team Antigua Island Girls (TAIG): The Talisker Whisky Atlantic Challenge is one of the world’s most incredible challenges. Dubbed the ‘world’s toughest row,’ it’s a race that sees participants traveling over 3,000 nautical miles from La Gomera in the Canary Islands to Nelson’s Dockyard in Antigua. Every year, the Talisker Whisky Atlantic Challenge inspires people all around the world and brings together teams from all walks of life. We are four women from completely different backgrounds and disciplines; rowing was not one but we all had that spirit of adventure burning deep within.

UW: What motivated a group of women who had never rowed before to enter and complete this challenge?

TAIG: The motivations included historic representation for our country, Antigua and Barbuda, becoming the first women’s team from the country and the Caribbean, as well as being the first all-Black team to row any ocean. We also wanted to raise funds for a charity supporting women and girls.

Each of us being naturally competitive and with our own drive was also part of the motivation. For Kevinia, team captain and consummate sportswoman, this was another challenge in a life of seeking out challenges. For Elvira, this was a chance to show her teenage son a real-life example of facing and conquering challenges outside your comfort zone.

For Samara, an avid sailor and lover of the sea, this was another seafaring challenge and the opportunity to keep writing her own story in a life that is a comeback story. For Christal, it was a chance to prove that mental health issues are conquerable. Once we began our campaign, the outpouring of love and support from across the Diaspora gave us even more motivation and purpose.

UW: What was involved in your training for the Talisker Whisky Atlantic Challenge?

TAIG: Because we had never rowed a day in our lives when we took on this challenge we exhibited very poor technique. Coupled with inexperience and ignorance, we had our work cut out for us. It meant that we had to train, train, train. We trained in the gym for strength, fitness, and endurance. We trained in the water to learn how to row, to learn the sea, navigation, and everything to survive at sea. We had mental preparation to manage how four people with vastly different personalities, idiosyncrasies, dietary habits, would make it home across miles in a tight space. We tackled these obstacles head-on until we significantly improved and became competent in our row training in preparation for the Talisker Whisky Atlantic Challenge.

UW: Tell us about the connection between your rowing journey and the Trans-Atlantic Slave Trade route?

TAIG: With the Canary Islands being off the coast of West Africa, our route to Antigua meant that we would cross the Trans-Atlantic Slave Trade route. As the first all-Black team to row across the Atlantic, this held significance to us.

We knew this was highly symbolic before we left. We were going to voluntarily traverse the waters across which our ancestors were forcibly and brutally taken as slaves. It was an act of symbolic empowerment for us and our community at home and at large.

UW: What were your thoughts or experiences surrounding this significance while you were out on ocean?

Nothing that we knew academically prepared us for the emotional and even spiritual experience that we had, as individuals and as a team, as we rowed home. It’s hard to put into words, but the experience was humbling and transformational. When we say we felt the spirit of our ancestors, we mean it, even if we are unable to adequately describe it.

Not a day at sea passed that we didn’t feel protected and guided. We know that those who went before us were with us always, with signs including being untouched by squalls all around us. We also felt the presence of deceased friends and family and reflected on the impact they had on our lives. We count ourselves privileged to have had the opportunity to connect with our ancestors in such a profound way.

UW: What were your biggest challenges while rowing each day and night for the Talisker Whisky Atlantic Challenge?

TAIG: Our biggest challenge was the wind or lack thereof. We had hoped for—and had mentally prepared for—high winds, big waves, and fast waters. For five weeks of our seven-week crossing, we got the exact opposite of that, little to no wind, flat water, and waves that seemed to go in every direction except West, which is where we needed to go.

That meant that a journey that we expected to take five weeks maximum, took seven weeks instead. While we had enough food to last us, we ran out of our snacks and tastier food options by the five-week mark. That made life on the water much less pleasant.

At the start of the race, despite our well-laid plan and preparations to put some miles on the board early, extreme seasickness for everyone but Samara (the sailor) dominated the first few days. It was especially hard on Elvira, with our team at home warning that she would need to be evacuated if she didn’t get better. That would have meant that the other three could row home but would be out of the competition. That reality jolted Elvira to overcome.

Besides having to slog through hot, still, days where we felt we were going nowhere for hours and days at a time, we also had two acute events, which made things more challenging. The first was our autopilot. It malfunctioned, and we went through all our spares and still had problems. That meant we ended up having to hand-steer until we figured out a solution.

Hand steering is one of the most difficult jobs to do because it means only one person can row and another person has to maintain intense concentration and physical effort to keep the boat on course against the push and pull of waves and under-current, which would push a boat in the wrong direction. When hand steering, Kevinia and Samara were unable to take a break for that two-hour shift. This meant dehydration and extreme fatigue, which seriously affected the team dynamics in a small space. It was a blessing to finally find a temporary solution to the autopilot issue.

Another challenge came when we had a near-capsize three days before getting home; that event broke two of our oars and knocked out our very fragile autopilot. It rattled us deeply because it resulted from a rogue wave that we didn’t see as it was pitch dark. It sapped our already drained energy and rattled our fragile emotional state. Thankfully, we didn’t have much further to go.

UW: You’re role models for girls and women everywhere, in particular Black girls and women, because of the strength you showed. What are some messages you would like to send to women who doubt their own strength?

UW: What is next for the team?

TAIG: The team has formed an official charity and has continued to focus on giving back and assisting in philanthropic work within the community. We are also exploring potential business ventures that will help to promote our story and continue to inspire other ordinary people to do extraordinary things.

We are exploring land-based adventures. We are also not opposed to another seafaring challenge. We are, at heart, competitors, and although as indicated in the name, Talisker Whiskey Atlantic Challenge is a challenge and not a race. We had set our sights on a faster finish and better placement. We still harbor thoughts of a podium finish for the Talisker Whisky Atlantic Challenge.

Taslim Jaffer is a writer/editor with a special interest in culture, identity and home. She is a first-generation Canadian with roots in India and East Africa, and is currently working on her memoir-in-essays for a Master of Fine Arts. Follow her on Instagram and Twitter @taslimjaffer.