The Devastating Realities of Rohingya Women in Refugee Camps 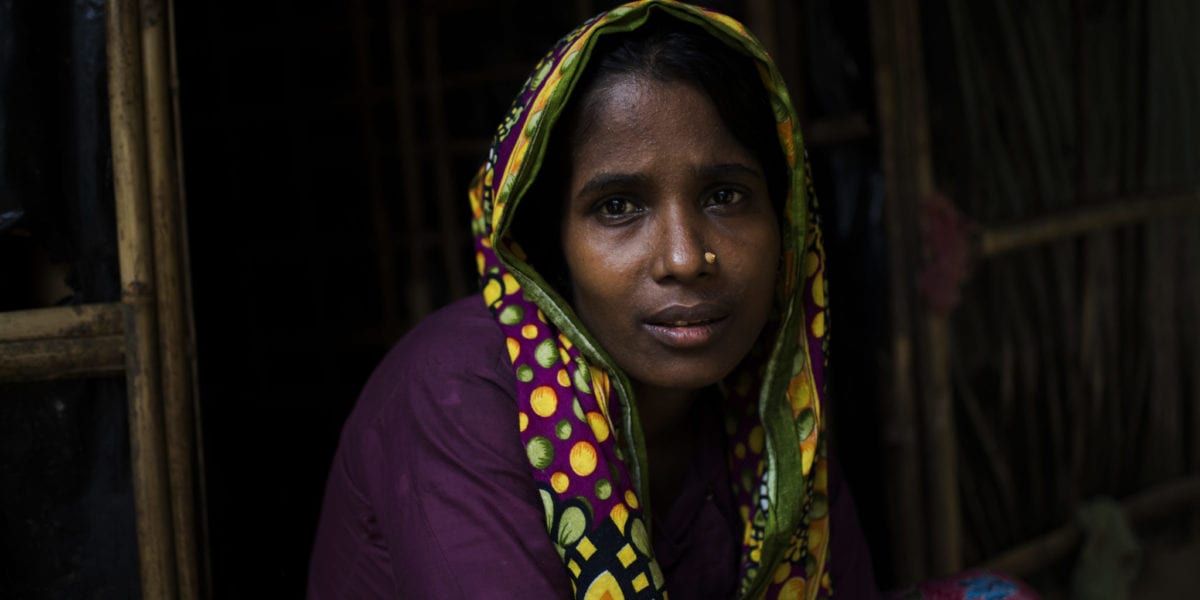 Amina, her husband, and their three living sons have been living on the Kutupalong refugee camp for 9 months. © | Hailey Sadler

Burning, burning, burning. Amina* uses the same word over and over again to describe the night the military rampaged through her village. Burning, beheading, raping, and killing the Muslim Rohingya community that once called it home, Myanmar’s military swept through the area in what has been internationally condemned as ethnic cleansing.” Amina was pregnant and fleeing from her burning home with her husband and four sons when a soldier grabbed her eight-year-old boy and threw him back into the flames, burning him alive. “I didn’t have a chance to save him,” remembers Amina, a Rohingya woman.

They walked through the jungle for a week, eating leaves, before reaching India. Upon arrival in Bangladesh, Amina and her family’s new reality became confined to the corners of Kutupalong, the largest and most densely populated refugee settlement in the world. Kutupalong is a sea of makeshift shelters stacked precariously on top of each other, too close for comfort, like a giant house of cards.

Similar to Amina’s family, the over 700,000 Rohingya refugees who have poured into Kutupalong since last August fled the violent crackdown that Myanmar’s military launched in the northern Rhakine State. Reportedly, the extreme violence was in response to a series of attacks by a small Rohingya rebel group. The U.S. has labeled it an “ethnic cleansing,” while senior United Nations officials say it “bears the hallmarks of genocide.”

Amina, and the thousands of other Rohingya women like her in the refugee camps, are the ones who survived. Now, they have to survive the realities of being a female refugee. Walking through the camps, there is a sense of life going on. Children shout and chase each other between shelters. Men carry bamboo on their shoulders or cluster around a makeshift barber shop, comprised of a chair and a single sheet hung between two trees. These rhythms of normalcy are both a byproduct of sheer necessity and a testament to the gritty resilience of the Rohingya people.

Beneath the clamor of everyday life in the refugee camp, there is the undercurrent of intense human suffering. Lives are irrevocably interrupted and altered, amidst life going on. As is often the case in such crises, women in the camps bear added burdens, forming a uniquely vulnerable subset of an already mistreated minority struggling for survival.

Arriving in Bangladesh, many women were pregnant from the Myanmar military’s widespread rape campaign. Now, over nine months later, these women and girls are giving birth—often in unsafe and unsanitary conditions—and grappling with the complex emotional trauma the babies bring with them. Others arrived grieving the violent death of a child or loved ones. Some came physically injured, like Dildar, who limped into the camp with a fresh bullet wound in her leg. Three of Dildar’s children were gunned down by military bullets as they ran; they were 18, 12, and three years old. The office of the United Nations High Commissioner for Refugees (UNHCR) estimates 17 percent of Rohingya households in the refugee camps are now headed by single mothers as a result of the violence.

“Life in the camp is hard,” Dildar says. The bullet wound has healed now, but it left a purplish scar on her shin. “The house is no good. The rains are coming. And the heat…” Her voice trails off. There are no words.

Conditions are indeed brutal. Shelters—woven from bamboo and tarps—are roughly 8×12’. Rations are limited, there’s no running water, and little electricity. Privacy is non-existent. For Rohingya women whose religious traditions, rural environments, and fear of the military led many to live sheltered lives in Myanmar, this unsparing new reality is particularly challenging.

Take something as simple as toilets. Aid workers have reported women choosing not to eat or building makeshift toilets and bathing areas within their shacks — divided from the rest of the living area with tarps — to avoid using the public restrooms. Although certain shared toilets and bathing areas are designated female-only, men are often loitering nearby making sexual assault a frequent threat.

In response, many women choose not to venture too far from their makeshift homes—some for safety, others for modesty if they were accustomed to wearing a burqa and weren’t able to bring or borrow one. Instead, women can be found in the stifling darkness of shelters that offer respite from the sun’s scorching rays but not its heat, squinting through smoke as they cook over open fires, caring for their children, washing clothes in water gathered at the communal pumps, or simply sitting on their doorsteps.

Even within the shelters, there is little real safety. The fabric tacked over the doorways is hardly a barrier to would-be intruders, traffickers, or assaulters. Domestic abuse is also a reality, so even a sturdy door wouldn’t necessarily keep violence out. Reporting of abuse is irregular, but aid groups have spoken about systemic domestic violence in the camps, many of the reported cases resulting in emergency medical attention.

One source of hope for female refugees is the tenacious efforts of aid workers who brave the mud, monsoons, and oppressive heat to volunteer their time and effort to helping refugees. Aid workers are the hands behind UNCHR’s push to distribute female hygiene kits and teach women how to sew and sell the products. They are the hearts behind the UN Women and Action Aid’s work to set up multi-purpose women’s centers, providing a safe haven, counseling, resources, and skills training. They are the minds behind No Name Charity’s efforts to introduce white coal to the camps, a form of biofuel produced by agriculture or forestry waste that is less pollutive and less damaging to inhale.

However, despite the outsized efforts of a few, progress is slow in the face of such overwhelming human suffering. The international community’s response has been far from sufficient. So far, there has been no resolution or solution. Donor fatigue is setting in. Media attention has largely turned elsewhere. Meanwhile—with monsoons flooding the poorly constructed camps—the crisis is only compounding.

Where does this leave the Rohingya women of the Kutupalong refugee camp? Crouching in smoke-filled shelters. Battling the mud and landslides to collect rations from food distributions. Caring for their children and working to increase their odds of survival. Sitting in their doorways. Sharing their stories. Not to arouse pity but to impel action—asking the world not to look away. 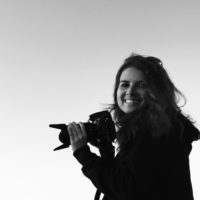 Hailey Sadler is an independent photojournalist and documentary photographer based out of Washington, D.C. Formerly a Congressional Communications Director, she left her career on Capitol Hill to embed with the U.S. Marines in Helmand, Afghanistan and from there, has traveled to six continents and over 25 countries documenting the human toll of conflict. Her documentary work focuses on underreported narratives and the complex human stories behind the headlines.

« What the Legalization Of Marijuana Means For Canadian Women
Meet the Cover Star of Unearth Women’s First Issue, Isobel Yeung »