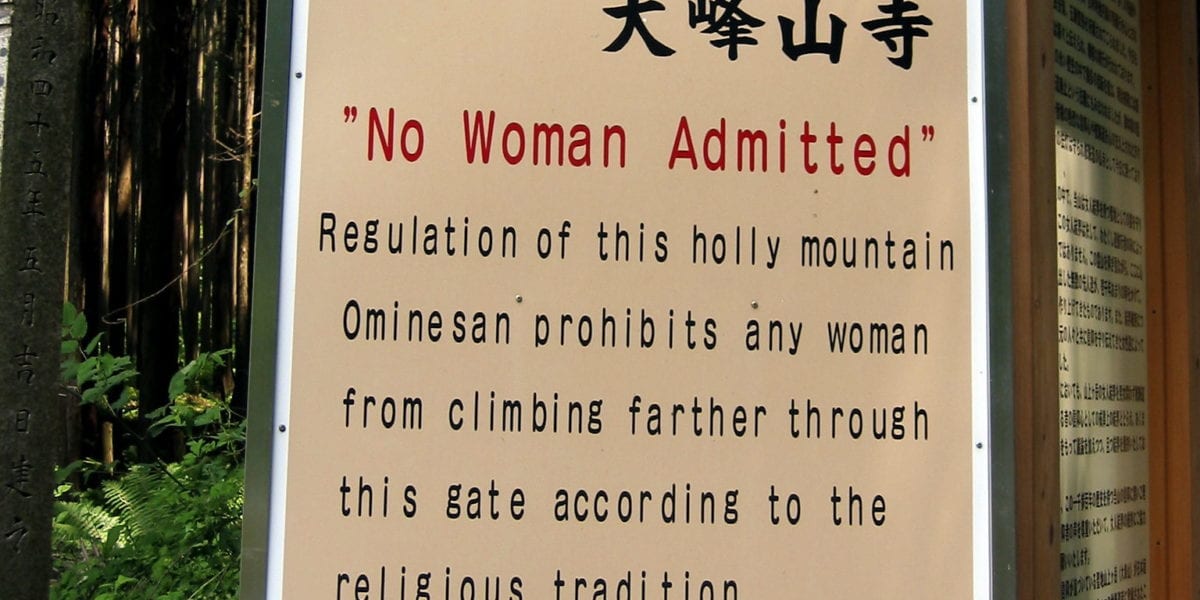 Women dominate the travel space, accounting for an astounding 85 percent of solo voyagers, according to a 2017 statistic in Travel Agent. So it may come as a surprise that factors such as menstruation and sexuality still determine whether women are granted entry inside otherwise public tourist destinations. From divine temples to sacred mountains, ladies beware: you’re barred from the following locales—at least for now.

This important 18th century temple in Mandalay, Myanmar enshrines a storied golden buddha that purportedly beckons thousands of visitors per day. The towering icon is said to be 2,000 years old, transported from the town of Mrauk U in 1784 at the behest of King Bodawpaya, who mobilized the Burmese army to seize it and ordered the subsequent construction of Mahamuni Paya to house it in 1785.

According to Travelfish, it’s estimated that some two tons of gold leaf have been applied by male worshippers to the statue’s body over the centuries, though never to his shiny golden head, which is polished by monks every morning at 4am. Women are allowed inside the temple, but due to their subverted social status and dangerous wiles, they may only venerate the buddha from afar. Disallowed from directly offering him gold, women must apply it by way of a middleman. However, television screens around the temple live stream male worship of the buddha for those who are prohibited from breaching his immediate vicinity.

Jutting out from a northern Greek peninsula, the ‘Holy Mountain’ of Mount Athos is a magnificent UNESCO World Heritage Site comprised of 20 Eastern Orthodox monasteries dating as far back as the 11th century. The autonomous, 130 square-mile has forbidden women for over a millennium; it may—according to the BBC—actually be the largest region in the world that still bans female visitors.

Mount Athos remains an active monastic site inhabited by some 1,400 monks which, traditionally, is why women have been barred from it—female presence would jeopardize their celibacy. But the powers that be have taken it a step further so that even female animals are prohibited from traversing the peninsula. That said, a cheeky exception has been made for female cats, who have long kept the mouse population at bay.

Sited in the ancient Japanese city of Nara, Mount Omine is a holy mountain of particular significance to the Shugendo sect of spiritualism, an 8th century Buddhist order rooted in unwavering principles of abstinence. Mount Omine is a crucial part of the Shugendo pilgrimage route, which runs from Yoshino, a town in the Kii mountain range, to the Kumano region.

The sacred trail was established some 1,000 years ago during the Heian period of Japanese history, and the rules that guide this ancient journey are as antiquated as the route itself. Women were barred from setting foot on any part of the trail until the 1960s, and as it stands, they remain banned from Mount Omine thanks to their negative associations with menstruation and childbirth. Women are considered both inferior and impure in certain sects of Buddhism, so their presence is feared to taint the holy site.

In India, two women were forced into hiding after entering the Sabarimala Ayyappa Temple on January 2, 2019. The move was legal as of September 2018, when women were granted permission to worship there for the first time; but a series of violent and ongoing protests following the Supreme Court’s decision attempt to thwart female presence anywhere near the holy site.

Women between the ages of 10 and 50—the designated range of menstruation—have long been prohibited from worshipping at the sacred temple which, according to TIME magazine, welcomes “one of the largest annual pilgrimages in the world.” It’s believed that menstruating women house impure energy, though other temples such as the Ranakpur Jain Temple in Rajasthan are slightly more lenient and only forbid women who are menstruating at the time.

According to New Delhi’s Hindustan Times, women are still banned from Lord Annappa Temple in Karnataka and Rishi Dhroom Ashram and Temple in Uttar Pradesh for fear of angering the presiding deity. Women are granted restricted access to Sree Padmanabhaswamy Temple in Kerala, Nizamuddin Dargah in Delhi, and Bhavani Deeksha Mandapam in Andhra Pradesh, and allowed inside Delhi’s Jama Masjid mosque only until sunset.

Goa Gajah is a UNESCO World Heritage Site located near Ubud, Bali. Also referred to as Elephant Cave—possibly for what is believed to be a carved likeness of an elephant at the entrance or perhaps a reference to the elephant-headed Hindu god Ganesh—this impressive sanctuary with origins in the 9th century is characterized by an exquisitely sculpted entryway that leads to a meditative pool, ancient stone carvings, and a traditional Balinese pavilion called a wantilan, which is typically reserved for communal activities. Sacred to Buddhist and Shaivite practitioners, Goa Gajah is both a holy pilgrimage site and a popular tourist destination, but menstruating women are not allowed inside the complex for their associations with impure energy.