In Conversation with the Feminist Artist, Suzy Kellems Dominik 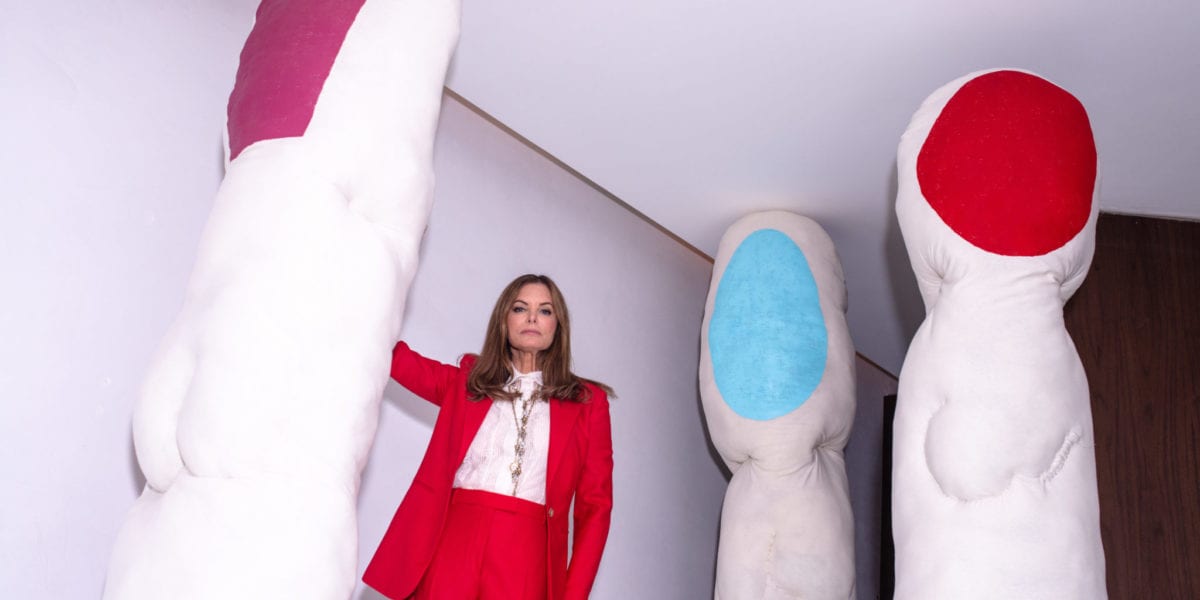 Suzy Kellems Dominik illustrates the many branches of her personal narrative through arresting installations and mixed media artworks. Her practice lies at the intersection of feminism, freedom, and identity; in turn, her work facilitates conversation, education, and empowerment. Kellems Dominik’s gracious disposition and apparent enthusiasm for her craft foster a certain inquisitiveness that propels her toward new art forms and unabashed self-expression. Following the success of her exhibition at Art Basel Miami Beach, Kellems Dominik talks feminism and fearlessness with Unearth Women.

UNEARTH WOMEN (UW): TELL US ABOUT YOURSELF!

Suzy Kellems Dominik (SKD): My name is Suzy Kellems Dominik and I am an emotional autobiographer. I am a self-teaching artist (I say that rather than “self-taught” artist). I feel that my medium is emotional autobiography. The actual physical mediums I use are vast, and if I don’t feel I can sufficiently communicate my work in a medium that I am proficient at, then I’ll learn and research a new skill. So this is why I say I’m a “self-teaching” artist, because I’m constantly learning. I am 57 years old!

UW: WHAT PROMPTED YOUR DECISION TO BECOME AN ARTIST?

SKD: I was compelled to speak out. Art—and when I say art I mean the physical making of art, research, literature—these things have always been a part of my life practice. To back up a little, I was a world-class athlete, I was a mother (I have two daughters), and at 50, I sat my family down and said that I would be holding myself equal with them, that I felt compelled to speak out through my work.

UW: FEMINISM IS CENTRAL TO YOUR PRACTICE. HOW DO YOU ENDEAVOR TO CONVEY THE FEMALE EXPERIENCE THROUGH ART?

SKD: I hadn’t thought of how to articulate this until I was on a panel in Miami [at Art Basel Miami Beach]. The most important thing I think any woman can do is to be listed in the archival experience—the chronicling of her society. It’s the highest endeavor to create personal work from a particular point of view and to be fearless in doing so. But unless you are noted in traditional media, on the internet, in the literature of the time—according to this idea that history is written by the victors—unless our successes and failures as women are noted in our society and our community, they won’t [be remembered] a hundred years, a thousand years from now. It’s very important that our voices are marked, and I try to do that through my artistic practice.

UW: YOU MADE WAVES AT ART BASEL MIAMI BEACH IN 2017 WITH I CAN FEEL, AND YOU RETURNED IN DECEMBER (2018) WITH INVISIBLE. WHAT’S THE CONCEPT BEHIND INVISIBLE?

SKD: A decade ago—and again, it’s my own emotional biography so I can only speak from my experience—I was on a trip in Europe, and I felt like I was treated very differently there than I was at home. It dawned on me that I had lost my individual value. I was no longer valued for my beauty because I had reached a certain age. In that moment, I pulled out my pad, I wrote an essay on it, and that was the beginning of the work Invisible. So I turn to the woman at the table next to me (who was Maya Angelou) and we actually had a conversation about it, which I will hold forever.

I took that essay and those thoughts home with me. At the same time, I started to think about how my children saw themselves. I created an identity project with a sock puppet, and gave them choices for hair color, eye color, etc. I made five of my own puppets. I was still feeling the loss of my identity because I was no longer part of that youth culture. Those puppets sat in my studio for a decade, and with Invisible, 12 inches became 12 feet. And that was the idea of the project: that certain women are no longer valued by society. For lack of a better term, I wanted [these puppets] to be large and in charge and in your face so that people could finally see this woman.

UW: WHICH ARTISTS HAVE INSPIRED YOU MOST?

SKD: I’d like to diverge slightly from this question because it made me think about my work Beatrice—To Hell and Back. The centerpiece of the multimedia installation is a goat, which is my alter ego—I poetically identified myself as the goat—who has a covering of 72 sheets of gold leaf with a silver-leaf line all the way around her. The piece’s subject is that moment in 1295 when Dante defines Beatrice as “beatific,” not because of who she is, but how she mirrors how he feels about himself.

The artwork retells the narrative from her point of view. In the end, it is in fact Beatrice who ultimately finds heaven on earth, freedom from perceived and literal shackles that bound her.  The “silver lining” that is symbolized with the silver leaf underscores the irony that in spite of—or perhaps because of—these experiences with which I identify, I was ultimately able to experience this profound surge of creative energy and was compelled to produce this body of work.

I had different images based on the different cantos [in Dante’s Divine Comedy], and the jumping off point was his famous quote, “Abandon all hope ye who enter here.” I took us through my representation of hell with a nine-foot sculpture. I balanced it with a multi-level soundtrack with Guns & Roses’ Welcome to the Jungle and Prince’s Baby I’m a Star. So it seems a long way from who has been most inspirational to me, but my point is that I’m inspired by Italian history and the Renaissance. By sculpture. By the pop culture that I live in.

UW: ARE YOU INSPIRED BY ANY FEMALE ARTISTS IN PARTICULAR?

I’m very influenced by [French conceptual artist] Sophie Calle. Extremely so. I think that her work demonstrates human vulnerability, identity and intimacy in a way that’s fearless, personal, and voyeuristic, which I think also speaks to my body of work.

I also think of [19th century French sculptress and partner to sculptor Auguste Rodin] Camille Claudel. I had a moment this summer when I was working on You Are Dead to Me: a tomb that I created out 7,368 stones from the river near the studio at my ranch in Wyoming, which I hand-numbered with a Japanese brush and white ink. I laid the stones in an orderly grid, and literally climbed over the rubble of my former emotional life to complete the numbering of each individual stone before they were transported, by hand, for the next phase of the work. They represent the days from the moment I met this person to the very moment that I realized that they were dead to me.

So it’s a land-based project using video and a drone, time and place and element, having its way with my grief. When the river floods the tomb, my hypothesis is that I will still find some of those stones, meaning that my grief is never completely washed away. So over the summer I needed a few more large stones, and I had this Camille Claudel moment—[like I was] digging clay when no one was watching out of the streets of Paris.

Finally, Judy Chicago! I saw her speak at Soho House in Miami, and I was very moved by the way she spoke about her work. She was at UCLA in the 1950s and men could literally not [bring themselves to] look at it. I related to her [endeavor to] create her own voice and her own type of feminism despite the feminine constructs of her community.

UW: TELL US ABOUT YOUR EXPERIENCE AS A WOMAN IN THE ART INDUSTRY.

ASKD: The best advice I ever received was, “Why not me?” And I truly believed that—that I have something important to say, that I have the skills to say it, and that I have to be fearless in putting that work out there. And it relates to not just the challenge of being a woman, but my total experience: I am a female in the arts, struggling; I’m an emerging artist; struggling; I am a 57-year-old emerging artist challenging the conventions of society, struggling. So I guess what I’m saying is that it’s all a wonderful, glorious struggle, and I’m using the skills and opportunities that the democratization of new media affords to kick in the door from the side, and work my way through in alternative ways.

UW: HOW DO YOU HOPE TO SEE THE WORLD SHIFT TO ELEVATE WOMEN?

SKD: American society has cracked open in the most positive way. Women’s voices have been heard in a way that they haven’t since first/second wave feminism and even the days of the suffragettes. I think that there’s no going back. It’s a constant struggle and the most important thing is to put our voices out there. Vote. Speak. Be as honest and open and fearless as possible, but society fights back against change. We’re gonna keep at it and wear society down.

UW: IF YOU COULD HAVE DINNER WITH A WOMAN—FICTIONAL, LIVING, OR HISTORIC—WHO WOULD YOU CHOOSE?

SKD: That might be the most difficult question! My answer is: wouldn’t it be interesting to sit at Judy Chicago’s The Dinner Party. It has 39 place settings, so I would be one, and I would fill them all with women throughout history of different experiences, and that would be the most remarkable evening of all.

Having said that: the late [American playwright] Wendy Wasserstein, and I would of course have to sit Hillary Clinton right next to her, Maya Angelou, and my daughters, who are the inspiration for all of this.