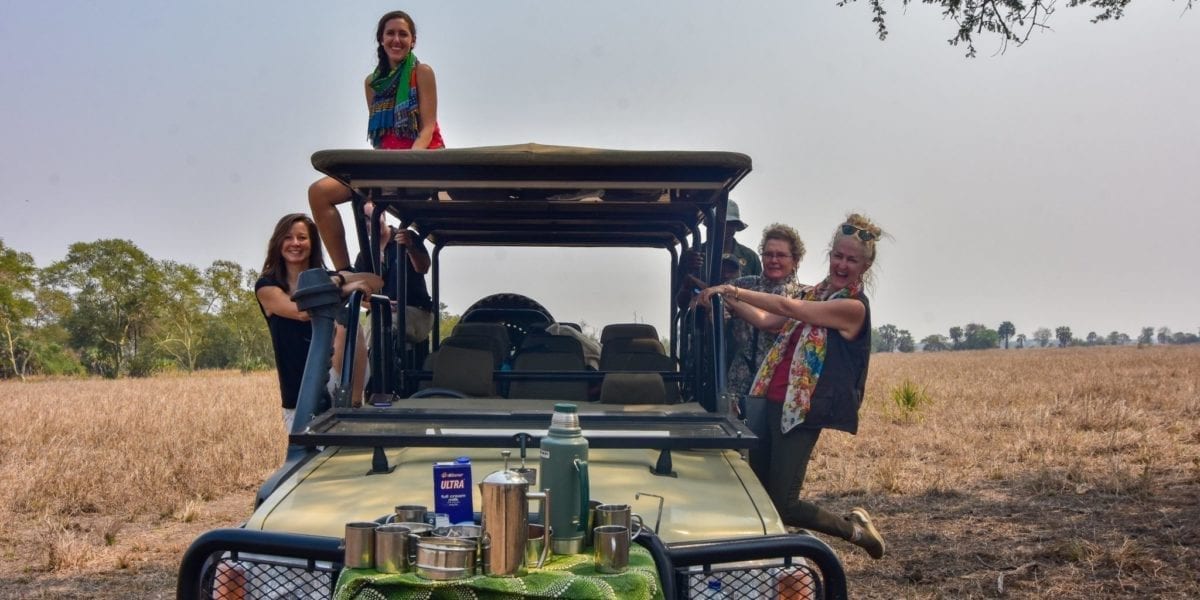 Day one on the road in Mozambique taught us one thing: We weren’t going anywhere fast. Between rutted dirt roads, cavernous potholes, and sharing the highway with everything from errant goats to massive trucks, overland travel was an exercise in patience. Our expedition vehicles (Blue Sky Society leader Carla Geyser’s signature pink Land Rover and a rented Toyota Hilux) were put to the test. But as we got to know this beautiful land and the people striving to protect it, another truth also became very clear: The journey may be long and difficult, but the destination is absolutely worth the challenge.

This 2,113-kilometer, 17-day overland expedition through Mozambique was more than just a chance to see the sights. It was a Journey with Purpose: A trip led by the non-profit Blue Sky Society that harnesses the power of travelers to make a difference.

Blue Sky Society’s goal is not only to visit Mozambique’s conservation areas, but to help ensure their long-term protection. Our five-woman team (made up of ladies from four different countries and ranging in age from 30s to 60s) raised R60,000 to help fund the collaring of an elephant for conservation and research purposes. We also distributed 8,000 educational booklets to local schools to get the next generation excited about wildlife conservation. Along the way, we were privileged to meet with many of the passionate people fighting to protect wildlife in Mozambique, listen to their stories, and learn how to support their important work.

The Blue Sky Society Mozambique journey took us from the lush forests of Gilé National Reserve to plains teeming with waterbuck in Gorongosa National Park to the stunning blue waters of Bazaruto Archipelago National Park. Everywhere we went, we witnessed firsthand the challenges that Mozambique faces to protect its wildlife as well as the incredible work being done by conservationists in partnership with local communities.

The Struggle for Wildlife

Our first stop at Gilé National Reserve illustrated just how essential these efforts are. Mozambique’s oldest protected area is now on the brink of collapse. After a 16-year civil war in which the reserve’s animals fed soldiers on both sides, wildlife here has been poached down to a fraction of its former numbers. This sprawling miombo forest was once home to 200 rhino (the park’s emblem even bears a black rhino), but today none remain. Where many herds of elephant once roamed, there are now only a few dozen elephants managing to survive.

Those sobering facts were what brought us to Gilé. The non-profit Elephants Alive and a fantastic team of wildlife veterinarians had gathered there in hopes of attaching GPS tracking collars to five of the park’s elephants (one of which was funded by our team’s donations). Data from these collars can be used to understand the elephants’ movements and protect them from human-wildlife conflict so that these herds can begin to recover.

But we soon learned that collaring an elephant is easier said than done. Only two dirt roads crisscross this 2,860 square kilometer park, and if you don’t have the means to remove the occasional downed tree across your path, then you’re not going anywhere. Because elephants are extremely intelligent (and these ones remember being hunted by humans) they weren’t about to meet us at the roadside. The only way to spot them in the thick forest was by helicopter, meaning the wildlife vets spent hours in the air trying to locate a herd. Once they did, the race was on to dart one elephant from the air, find a place to land, hike through thick bush to reach the animal, and attach the collar before the sedative began to wear off. These vets had their work cut out for them.

Miraculously, by the end of the week the team had collared four of Gilé’s elusive elephants. (We chose to dub the cow wearing our collar “Ghost”, for her ability to vanish with her herd whenever we pursued them.) Hopefully the data they generate will help protect these beloved creatures by helping the park’s conservationists understand where and why they move. The collars will also provide an early warning system for the local community, who can now be notified when hungry elephants head their way to raid their crops. The park has been training locals in methods to ward off their large visitors without harming them – like piri piri guns, which send elephants running in the opposite direction, and beehives strategically placed around crops to keep elephants away.

Despite the commitment of so many, it was hard to see how Gilé’s recovery could really happen. As we drove through its verdant forest for hours upon hours without a glimpse of game, it was hard not to feel discouraged about the uphill journey Mozambique faces to save its wildlife. But we were about to get a glimpse into the future.

A Hope for Mozambique’s Future

After our own long journey south from Gilé on challenging roads, we arrived at Gorongosa National Park and saw for ourselves how conservation dreams can become reality.

Gorongosa recently faced the same tragic situation as Gilé: The once world-renowned park was decimated by the civil war and left in shambles. Before the war, 10,000 buffalo roamed Gorongosa. By the time both sides laid down their guns, almost none remained. Most of the park’s elephants were poached for their ivory. Both the park’s wildlife and its infrastructure were destroyed; tourists were no longer entering its gates.

Incredibly, in the 27 years since the end of the war Gorongosa has made a stunning recovery. The park formed a partnership with the Gregory C. Carr Foundation to launch the Gorongosa Restoration Project, which envisioned the creation of a “human rights park.” The project took a new approach to conservation: Protect the park by improving the lives of the humans who live around it. Gorongosa’s leadership recognized that the best protection for its wildlife was to be surrounded by a community who felt tangible benefits from conservation.

So they implemented an impressive array of programs for Gorongosa’s human neighbors: Opening schools, starting up mobile clinics, supporting sustainable farming practices, and providing economic opportunities. The park now employs 617 locals and supports 375 community health workers and 5,000 small farmers. They’re helping these farmers switch from slash and burn agriculture, which has deforested one-third of Mount Gorongosa, to shade-grown coffee that will bolster their incomes as well as protect the environment. And with the recognition that women’s empowerment goes hand in hand with conservation, they have formed Girls’ Clubs for 2,000 children around the park which help girls stay in school and out of child marriage.

Instead of holding itself apart from the local community, Gorongosa seeks to lift them up. They’re hoping this method will be more effective in protecting wildlife than guns and fences have ever been.

And the project is working. The park is now home to over 650 elephants. Last year 30 new lion cubs were born. Wild dogs, completely absent after the war, have been successfully reintroduced. We took three game drives with outstanding local guide Tonga Torcida, which lived up to experiences in Africa’s other famous parks. We watched elephants wander through sunlit forests of yellow fever trees, lions lazing around after a dinner of warthog, and massive herds of waterbuck grazing as the sun set over the plains.

We spent hours with Vasco Galante (Gorongosa’s Director of Communications) as he told us about the history of the park, described their unique path to recovery, and showed off their successes with the excitement of someone on his first day at a new job. In reality, Galante has been committed to Gorongosa since 2005, when he moved into a tent at the broken-down campsite without running water or electricity and lived on rice, beans, and a vision for what this place could be. Nearly 15 years later, that vision is coming true before his eyes.

If we’d left Gilé feeling overwhelmed by the challenges to come, we drove away from Gorongosa feeling triumphant about what we now knew could be accomplished.

Conservation from Land to Sea

After so many rough days on the road, we were overjoyed to arrive at Eden Bay Eco Lodge, just outside the town of Vilankulos on the coast of Mozambique. We fell asleep in our solar-powered tents to the sound of waves and awakened to a stunning view from the cliffside over the brilliant blues of the Indian Ocean. In the distance we could see the islands that make up Bazaruto Archipelago National Park, the last stop on our journey.

Like all of Mozambique’s protected areas, Bazaruto faces challenges to its wildlife. This park is special because it is home to a major population of dugongs, as well as dolphins, sea turtles, sharks, rays, and a variety of other sea life and exotic birds. Bazaruto is in the first year of a new partnership with African Parks, which hopes to revamp the management of the archipelago in order to ensure the survival of this unique ecosystem. We met with Pablo Schapira, who is in charge of operations at the park, another committed conservationist with a vision for the future.

Today, Bazaruto is threatened by massive fishing trawlers as well as sport fishers (who take advantage of the fact that it’s difficult to demarcate park borders at sea), as well as ballooning populations living on the islands and competing for their scant resources. Schapira hopes to see the park boundaries expanded, locals (particularly women) hired and trained as expert rangers, and local communities living on the islands supported to move toward sustainable lifestyle choices.

After spending a day at sea island hopping along the archipelago, we were thoroughly convinced of the importance of protecting this extraordinary place. We snorkeled among schools of vibrant fish decorated in an explosion of colors; we hiked sand dunes to gaze out over the rainbow of blues created by the sea at low tide; and we were lucky enough to spot dolphins and even an elusive dugong swimming alongside our boat.

Before our team headed back to the mainland, we stopped at Magarouque Island to drop off educational booklets at their tiny, open-air school. Just like at every school Blue Sky Society visits, the students there were overjoyed to sing, dance, and create art while learning about the incredible wildlife that is their heritage as Mozambicans. It will be these young people who see the fruits of today’s labors at Gilé, Gorongosa and Bazaruto. It will be their families who hopefully find prosperity in partnership with the parks.

Mozambique’s parks and the communities, which surround them face a long road ahead. But the people we were privileged to meet along our journey left us full of hope for the future. There’s something magical about quietly watching a herd of elephants saunter past your vehicle, or a pod of dolphins frolic in the sea around your boat. They make you realize how precious and fragile our world is and that if we don’t figure out how to share it, we’ll all sink as one.

As we unpacked our Blue Sky Society expedition vehicles for the final time and considered the path that Mozambique has to travel, it brought to mind the old proverb: “If you want to go fast, go alone. If you want to go far, go together.” 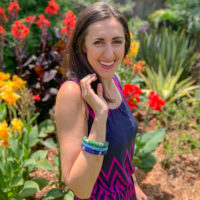 Emily Scott is a freelance writer and the co-creator of Two Dusty Travelers, a blog about ethical and sustainable travel. As a Registered Nurse with a background in humanitarian work, she believes that travel can change the world for the better if we do it right. Emily's bylines have appeared in Buzzfeed, Matador Network, How Not to Travel Like A Basic Bitch, Getaway Magazine, and more. She is based in Seattle, but her heart is in East Africa.