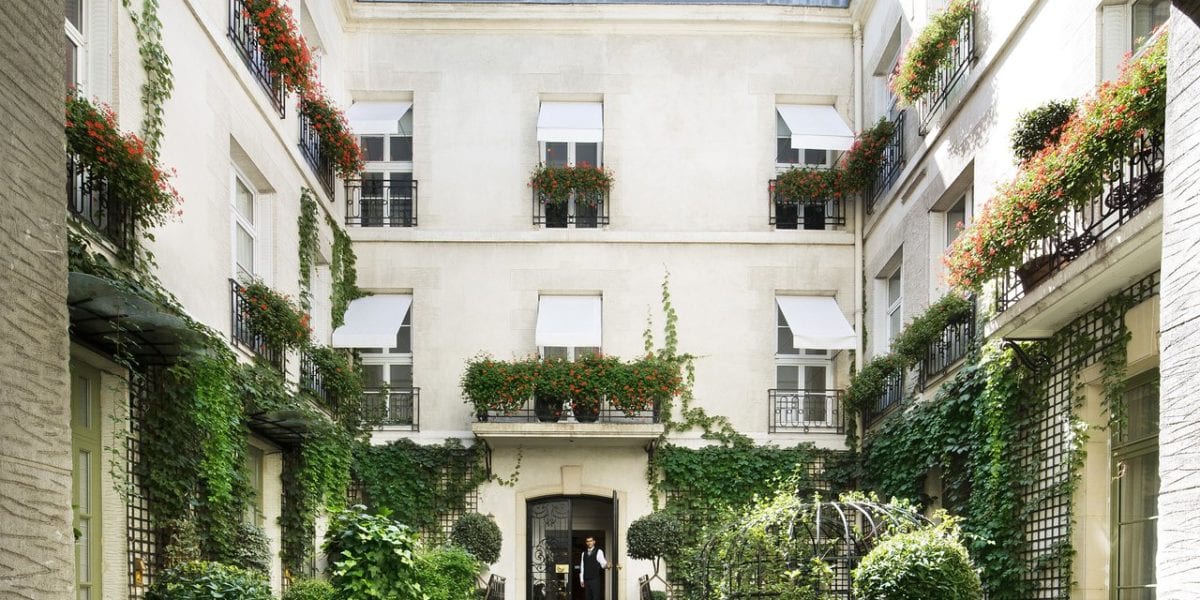 The Latin Quarter is bustling with nightlife as Parisians pour out of sidewalk cafes nestled along cobblestone streets. In the distance, the Seine is starting to shimmer beneath moonlit ornate bridges, its beauty eclipsed only by the illuminated gothic cathedral of Notre Dame rising in the distance. I am staying at the charming boutique hotel of Relais Christine in the Latin Quarter. The area around Relais Christine is dotted with eateries and shops that are only a short walk from Notre Dame, the Seine, and the Paris metro. The Relais Christine was originally a 16th-century mansion built on the ruins of the Austin Friars monastery founded in 1231 by Saint Louis. The hotel was fully renovated by its owners before opening to the public in 1979.

At first sight, the hotel is like a Parisian dream with a warm, roaring fireplace in the lobby. A large, flowered courtyard buffers the hotel from any noise, while rooms overlook the private sheltered garden at the back. The vine-covered boutique hotel brings up images of my favorite childhood Madeline books: “In an old house in Paris that was covered with vines…”

The hotel lobby opens up into a common area where plush couches and leather armchairs are accompanied by a complimentary 24-hour open bar. Paris jazz and vintage paintings compliment rich hues of red and gold. The first-floor common area evokes the feel of Paris in the twenties, as though I have strolled right into Woody Allen’s imagination from the set of Midnight in Paris.

After check-in, I am led to my room and can hardly stifle an excited gasp. The door marked “54” reveals a duplex with a living room overlooking the garden courtyard and a spiral staircase that winds up to a comfortable bed tucked underneath a skylight.

My favorite part of the room is a window overlooking the rooftops of Paris. As soon as my luggage is dropped off, I shamelessly descend into Paris clichés and play the Edith Piaf album the hotel provides, hop on the windowsill and let myself drift off into reveries of this inspiring city sprawled out before me.

Downstairs, the hotel offers a 24-hour spa boasting a wooden sauna and jacuzzi set inside an alcove of serenity. On a chilly evening, I take advantage of this spa and feel as though I’ve stumbled across a secret oasis. I never seem to run into other guests while flip-flopping from the jacuzzi to the sauna in the plush slippers and robes provided.

The next day, morning light pours in from the skylight above my bed and illuminates the crisp, white fluffy comforter that feels as though I’ve slept in the clouds. It is my first full day in Paris and I hop out of bed to not waste a minute of it. The Relais Christine offers a breakfast that is by far the best I’ve enjoyed in my reviews of hotels. The food includes an array of fresh fruit, French pastries (of course), hot breakfast items such as scrambled eggs or sausage, served alongside café or juice. While the spread isn’t unique in the typical sense, it is the quality of the food that sets it apart from the standard continental breakfasts and buffets I’ve come across in my travels. The medieval vaulted cellars of the dining hall are a nod to what was once the kitchen and while having petit dejeuner the original old well and fireplace can still be seen in the architecture.

After I’ve had my fill of fruit and yogurt, I stroll out into the crisp Parisian air; making a note to take advantage of the complimentary bicycles that the Relais Christine offers their guests. My visit to Paris unfolds like a French film with days spent walking along the Seine, soaking in the magic of the Eiffel Tower, enjoying rose macaroons from Laduree and café au chocolat at a sidewalk bistro. The magic never ceases to continue when I walk through the front doors of the Relais Christine hotel at the end of each day.

Book a stay at Relais Christine if you are looking to have an authentic Parisian experience without foregoing the comforts of a quality hotel. For couples especially, the Relais Christine is very romantic and offers a unique experience that can’t be found at other globally recognized hotels such as the Marriotts and Hiltons of the world. The Relais Christine is a boutique hotel and truly does offer a genuine Parisian feel; offering that rare blend of staying at a hotel while still feeling like a local.

*This writer was invited for a complimentary stay in exchange for editorial coverage. As always, all opinions expressed on Unearth Women remain unbiased.