Why are More Women Facing Unemployment During Coronavirus? 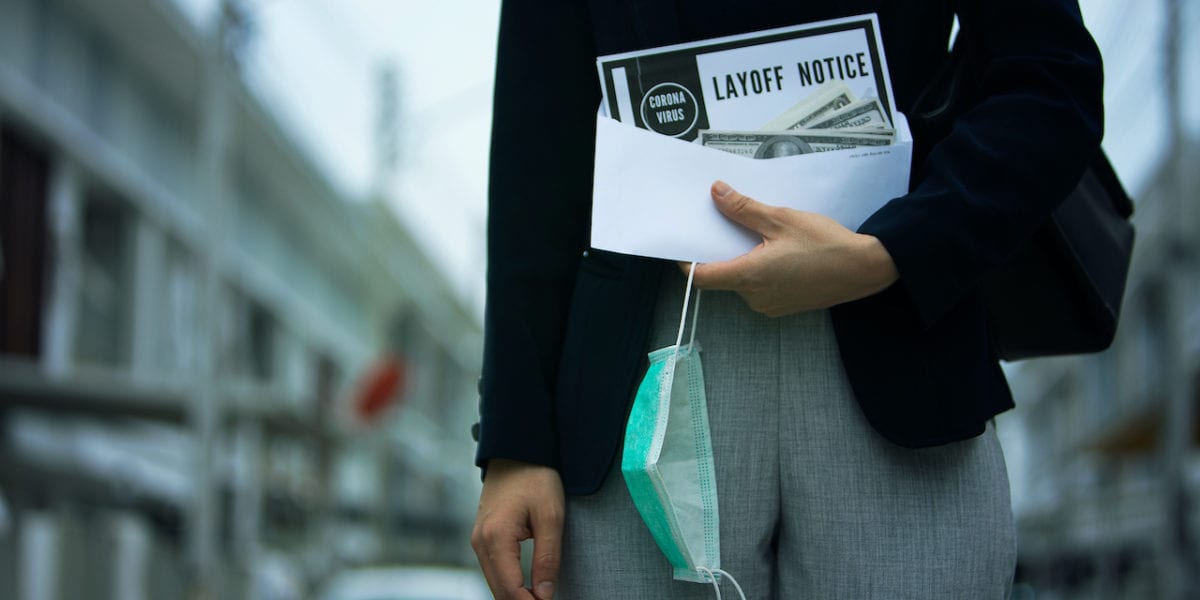 It’s Monday morning in New York and the weather is beginning to hint at the arrival of Summer. The sun peaks through grey clouds, birds chirp outside, and lime green leaves stand in stark contrast against the brick buildings. I’m up early in an effort to get through to the New York State Department of Labor (NYSDOL) and learn the status of my pending unemployment benefits. About a month into this song and dance, I already know this call to the NYSDOL will end with no response. I try to think of ways to to get through to a representative, convincing myself that a combination of timing and persistency will do the trick. I set my alarm for 8 AM and call right when they open. I call multiple times throughout the day hoping someone will pick up. I call right before their office closes. No one ever answers and yet, I keep calling,

Of course, I’m just one of many who are faced with unemployment amidst a global pandemic. In the end, the massive unemployment rate in the United States is distilled down to numbers: 20.5 million people lost their jobs in April of which 60 percent were women. There are a myriad of reasons as to why women seem to be getting laid off in droves right now.

According to a Pew Research Center report, women and minorities are overrepresented in the industries being hardest hit by the pandemic, such as hospitality, retail, and recreation. We’re seeing high-contact workplaces—like beauty parlors or dentist offices—where female workers typically out number men, closing their doors.

The Harvard Business Review suggests women and minorities are also adversely affected by lay offs because companies put them on the top of their “layoff lists.”

“Layoff lists are a necessary evil. Crises can hit fast, as Covid-19 did, so executives may need to compile their lists quickly. To do so, they generally look to position or tenure (“last hired, first fired”),” explains Alexandra Kalev of the Harvard Business Review. “Women and minorities tend to fill the most marginal, low-authority positions and to have the shortest tenures, and so they lose their jobs at disproportionately high rates.”

Just three months ago women had surpassed men to capture majority of jobs on company payrolls. According to NPR, now, women and minorities find themselves disproportionality affected by layoffs. This is a contrast to the last 2008/2009 recession in which male-dominated industries, like construction and finance, were hit hardest.

I was laid off from my job as Travel Editor back in April, a little over a month after my company made the decision to have us work from home. I had started my job back in January, following a grueling six months of unemployment in 2019, in which I applied to well over 300 journalism jobs. When I accepted this job offer, I turned down another remote opportunity in its place, in hopes of growing roots at a New York-based company I admire.

To say I was grateful for my new job is an understatement. I immersed myself into my job and work culture as best I could, making every effort to display my happiness for having landed this coveted position (because truly, Travel Editor roles are hard to come by these days). Four months later, I am out of work again.

I can’t say losing my job was entirely unexpected. As quarantine entered its second month and the travel industry screeched to halt, my newly formed role of Travel Editor at a historically restaurant-focused publication was becoming more obsolete. I tried to assuage my worries by focusing on stepping beyond my role and making myself useful with other projects, but in the end I was laid off alongside a handful of other staffers.

To lose my job and health insurance just weeks after testing positive for COVID-19 is terrifying. To not be able to get through to the Department of Labor to confirm I’ll be getting unemployment benefits, is harrowing. Like watching water slip slowly through my fingers, my savings and checking account deplete with no promise of incoming money on the horizon.

Trying to get through to the NYSDOL is a frustrating process. In the public eye, the Department of Labor and Governor Cuomo seemingly congratulate themselves on improved technology, an easy-to-navigate filing system, and a call-back functionality for those claiming benefits. One month into applying for benefits, I have yet to notice any improvements to a system that seems consistently overwhelmed, stalled, and dysfunctional. Amidst a pandemic, reports of people waiting for months have been circulating the news.

“This marks my fifth week since applying for unemployment,” Liisa Luick, a sales associate at Macy’s, told ABC News recently. She worked for the company for 13 years before she was furloughed from one of its Washington state locations.

Carly Keohane—a 31-year-old waitress in Rochester, New York— has been waiting over a month to receive $2,124 in unemployment payments. ““I call the Department of Labor every single day, and I know the options by heart now,” Keohane tells The New York Times. “It would be OK if I just knew where the money was.” Keohane’s bank account balance is down to $10.35.

Here is what I know for sure: I’ve exhausted my regular unemployment benefits but qualify for Pandemic Unemployment Assistance. As to whether my application has been received, when I’ll begin receiving payments, or even if I am filing my benefits correctly – I can’t say. I simply keep filing every Wednesday and hope for the best.

As my friend—another female editor recently laid off—so aptly put it: she has let the tide take her out is waiting to see where she lands. With most companies on a hiring freeze, and hardly any jobs available, over 20 million Americans can do little else.

Many unemploymed Americans are food insecure. Food banks have been crucial in donating meals. If you can, consider supporting Feeding America or World Central Kitchen. If you’d like to support the writers of Unearth Women, consider buying them a coffee.

« How This Family is Traveling the World During Quarantine
What Happens to Refugees During a Global Pandemic? »