The Women of Guatemala’s Kite Festival 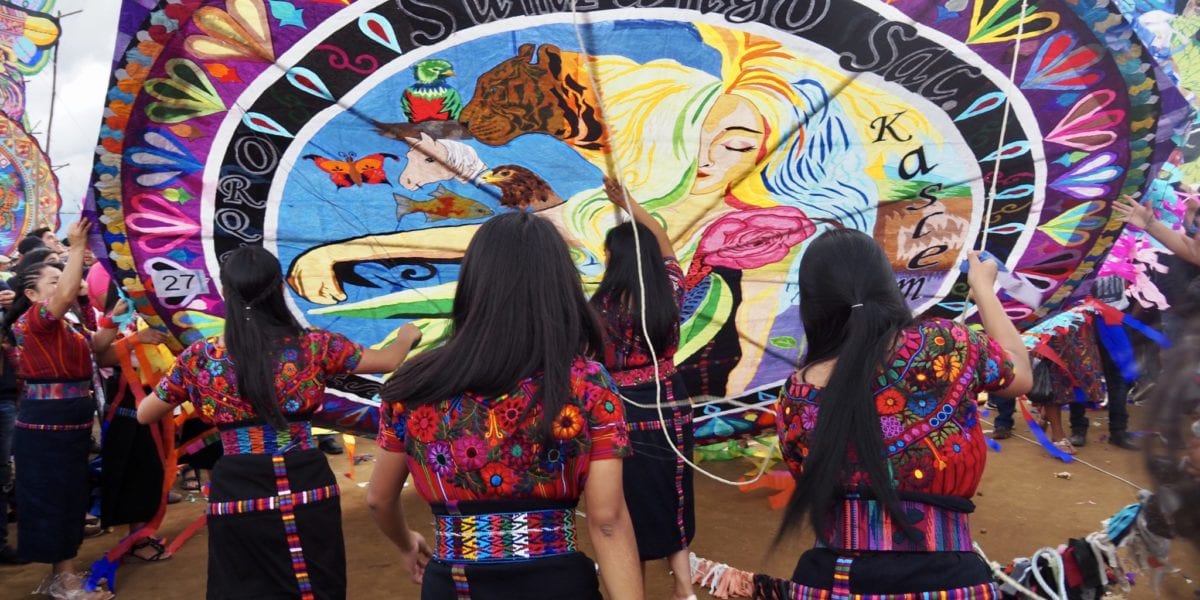 The United States has Halloween, Mexico has Dia de los Muertos, and Guatemala has its annual All Saints Day Barrilete Festival. The tradition of Guatemala’s Barrilete Festival—also known as the Giant Kite Festival—is said have began in Sumpango Sacatepéquez almost 200 years go. As the story goes, spirits were disturbing the community driving locals to visit the town shaman in hopes of appeasing the aggravated ghosts. The shaman advised the townspeople to make paper kites by hand and fly them, promising the sound of the kites cutting through the air would scare the spirits off.

“The weavings and kites are important cultural symbols and tied to specific ethno-linguistic Mayan identity in Guatemala, with designs depicting specific family stories, including, at times, government oppression and economic conditions,” explains Michael K. Steinberg, an associate professor at the University of Alabama, in a report about Guatemala’s traditions.

Traditionally, the large scale kites are built and flown by groups of men, taking an average of 40 days to assemble. Recently, the male-dominated tradition of kite flyers has been broken by a group of young women calling themselves the Orquideas Oficial, which translates to orchids. Self described as female kite flyers with a love of art, culture, and tradition—I arrive in the bustling town of Sumpango to see the Orquideas fly their handmade kite.

My trip to Sumpango starts with a visit to the cemetery, where a local ceremony takes place the night before to pray for strong winds. Painted in bright colors, overflowing with flowers, local families have picnics near the graves of loved ones, smiling as if the departed are sitting alongside them joining the meal. I catch one couple, in particular, enjoying ice cream on the edge of a grave while surrounded by flowers, chatter, and music.

As I wind my way through the cemetery, I let out on a main street where a procession of people are pushing their way forward to the kite festival. Food stalls and kite vendors line the street, as visitors and locals alike indulge in street food and cerveza. The crowds push forward, arriving at the town’s soccer field where we are all greeted with the site of massive kites. How do I begin to describe the feeling and sight of entering Sumpango’s soccer field on All Saints Day?

People stand around in awe at Guatemala’s kite festival—photographing, smiling, eating, drinking, laughing, running, and flying their own mini kites. It is such a dazzling display of human emotion in this one soccer field, outshone only by the intricate kites in front of me. Groups of kite flyers take turns sailing their creations into the air. Each time a kite is sent flying, the crowd cheers. Each time a kite seems to be falling, the crowd dodges. The people and the kites fall into a thrilling orchestrated dance.

I find the Orquideas Oficial and, sure enough, the women are the only group of female kite flyers at the massive festival. Donning matching outfits of traditional Mayan huipiles, the girls are bubbly, young teenagers. When it comes time for the Orquideas to sail their own kite into the air, they carry their creation across the soccer field gingerly, prop it up, and set it flying. For a split moment, the Orquideas’ kite soars—its colorful depiction of a woman dazzling against the grey-blue sky—and then abruptly tumbles back down to earth.

Many of the massive kites that are flown follow the same pattern, but both the kite flyers nor the crowd seem to mind. The festival, after all, seems less about sustaining a flying kite and more about basking in the creative beauty of each lovingly handmade design.

Between Sumpango’s rainbow-colored cemetery and the spectacle of Guatemala’s Kite Festival, I am struck by the stark contrast in how death is approached here versus in the United States. There is seemingly nothing melancholy, somber, nor grayscale about death in Guatemala. Rather, the approach to death here is countered by traditional celebrations that leave one feeling alive. Here, it’s not a parade of grief but simply a celebrate of life and all those who lived.