How the Book “Tell Her She Can’t” Celebrates Inspiring Women 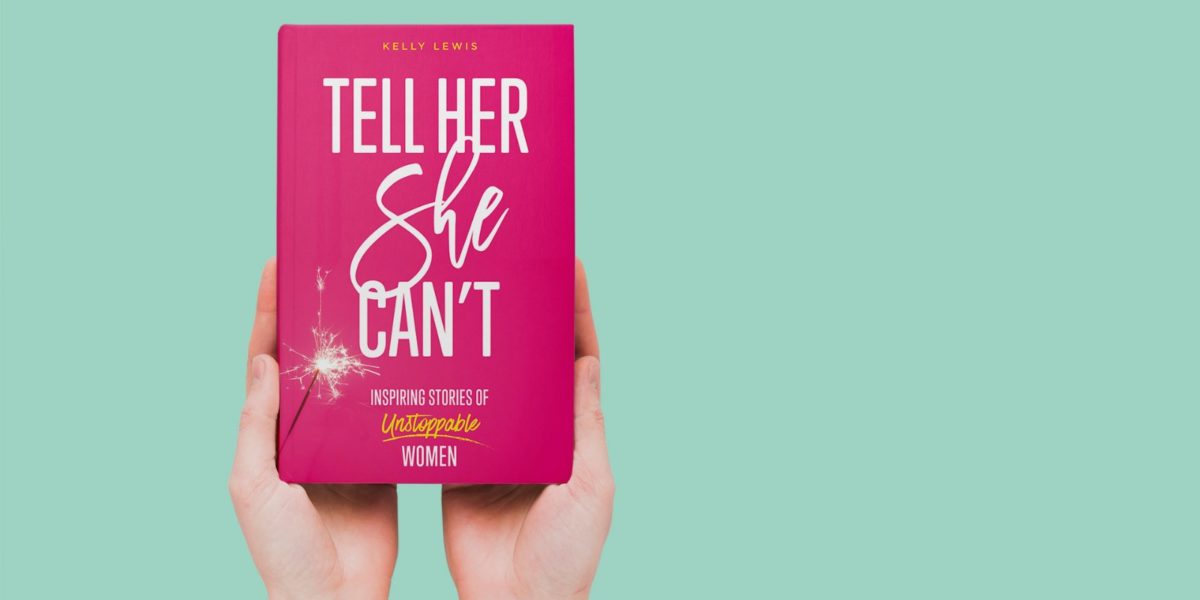 For those who aren’t familiar with Kelly Lewis, you need only look around the women’s travel space to see her golden mark imprinted on nearly every facet of the industry. From women’s travel conferences to tour companies catering to female travelers, from podcasts to guidebooks, from being co-founder of this very publication to a contributing author of our forthcoming book — Lewis has managed to build a veritable empire rooted in the belief that women can do anything. Whether you spot her on stage at her annual Women’s Travel Fest, ramping up the crowd of women; or at a travel event mingling with other female trailblazers — Lewis’s reputation as a powerhouse precedes her.

Like most great women, Lewis’s past is one riddled with adversity and naysayers. It is a vulnerability that she pours into the pages of her new book, Tell Her She Can’t, alongside 35 other women with inspiring stories to share. “I wanted to explore what made a person resilient and how and why some of us can push through adversity, while others become defined by it,” Lewis muses.

This idea of pushing past doubts — whether those doubts are planted by society or oneself — is the foundation of this book, which promises to encourage women to see beyond their perceived limitations. Be it physical, mental, or societal obstacles, the women in Tell Her She Can’t are a MUCH needed reminder to all of us that we are both our greatest enemies and — if we silence the doubts — our biggest champions. To “Tell Her She Can’t,” is a defiant invitation to see women who are told they can’t do something, then go on and do it. In this interview, Lewis speaks about the inspiration behind her new book and the writing process.

Unearth Women (UW): Tell me about what inspired your book, Tell Her She Can’t?

Kelly Lewis (KL): One night, in the bath, I heard a voice in my head saying, “Tell Her She Can’t” over and over — and I just thought: that’s totally my motto! I’ve always been the kind of person who wants to achieve things that other people say “I can’t” do (sometimes because they said I can’t). I’m perhaps famously stubborn in my family and friend circle, but what most people didn’t know is that this came out of necessity.

I grew up in an environment in which I was told every day that I was fat, ugly, and unworthy. I was told I was doomed to fail, that I’d never be enough, and that I’d wind up a “stain on society.” Every day was a battle to retain my power and to keep those voices from winning or becoming my own. To keep them from destroying me, I had to turn it all into fuel.

I liken this to a marathon runner on their last mile. You have to find something deep down inside you that you can pull up and harness as fuel to push you through the finish line. I used these memories and all of this negativity as fuel to prove everyone wrong, and do things like move abroad, become an entrepreneur, and visit every continent on this planet. And as it turns out, I’m not alone.

UW: Can you give us a preview of some of the women and stories readers can expect to find in the book?

KL: After writing out more of my own painful truths, I started doing interviews. I wanted to explore what made a person resilient and how and why some of us can push through adversity, while others become defined by it. This book features 35 stories of diverse women from around the globe who all have one thing in common: when the world tried to tell them they “can’t,” they did anyway.

In it are stories of adventurers, changemakers, warriors, and trailblazers. Some of my favorite stories are in the “adventurers” section, where we share travel stories that almost didn’t happen. This section features Felicity Aston, the first woman to cross-country ski Antarctica solo, as well as Jessica Nabongo, the first documented Black woman to travel to every county. It also features stories of women — just like you and me — who had a dream to travel and who made it happen.

Cazzy Magennis is in there, sharing more about her quest to be the first Type-1 Diabetic to travel to every country (despite doctors who say it’s impossible.). Lauren Pears is in there, talking about how she rode her bicycle from London to Istanbul despite the many people who said she was too young, that it wasn’t safe, and that she couldn’t do it.

I chose a variety of stories to include in this book because I really want to illustrate to readers: you are the maker of your own story, no matter what you’ve lived through or how many people have told you otherwise. You get to choose what you want and how you want to live.

UW: Why do you feel it’s important that Tell Her She Can’t exists?

KL: I just feel like society is always telling women what we can and can’t do, and I am SO OVER IT. Can’t have kids, what about your career? Can’t have a career, what about your family? We’re told travel is unsafe. We’re told certain schools are “out of our league.” For as much progress as we’ve made, there’s still so far to go.

Women are also generally not socialized to be defiant. We are taught to be “good girls” or to just go along and not make waves. But I believe change begins from the spark of defiance. The internal spark that makes you go, “hey wait a minute,” and question everything. That’s how change starts. I’ve also just never read a book like this, and I felt like it was high time someone wrote one!

UW: Of all the stories shared in Tell Her She Can’t, which one resonates with you the most and why?

KL: Oh gosh, there are so many! Some of my favorites involve women who now help others to do the same things they themselves were once told they couldn’t do. Those are the stories of the “champions” section.

Women like Leslie Pitt, who lost her leg as a child and now helps children in developing nations find access to prosthetic limbs. Or Constanza Roeder, who overcame Leukemia in childhood, and who now runs a non-profit that brings music and art to adult oncology centers. I love these stories because it really brings it all home. Whatever hardship we endure in life, we can draw upon to help others, thus giving that pain a purpose.

UW: What were some of the challenges you faced in writing this book?

KL: Emotionally, some of the hardest bits were reliving my own traumas. There were many days while writing that were really triggering, really hard to get through. Still, I found that writing this book also gave my trauma a purpose. It gave my struggles a meaning, and a way to help others. That led to tremendous amounts of healing, personally, and with my family.

Logistically, it was a challenge organizing the incredible stories I was told, and deciding which to include in this first book and where. I did over 100 interviews and had to narrow it down to just 35. That was hard! This project expanded really quickly and sort of just took off, which left me often feeling like I was walking a rocket with a leash. It became a podcast (also called Tell Her She Can’t) and now I’m working on the second book. Spending my days talking to powerful women about their hardest times and the ways in which they triumphed through them, has been such an honor. I don’t know if these ladies will ever know how much they healed me, too.

UW: What is your best advice to other aspiring book authors?

KL: There are a million bits of advice on the internet as to how to write a book, how not to not write a book, and why each way/method is bad. My advice is don’t listen to any of that, and write the book you want to write. Create a writing practice and actually stick to it. For me, that meant daily writing for at least four hours per day, over five months (I wrote from 9 AM to 1 PM daily). Give yourself deadlines, and celebrate when you hit them. It is such a journey to write and bring a book to market. But it is worth it!

UW: You are also the founder of Damesly and creator of the Women’s Travel Fest — how do you balance all of your amazing projects?

KL: Honestly I just wake up, drink some coffee, and try to get as much done in a day as I can. It certainly helps that I’m passionate about what I do! I never forget that my work reaches and impacts real live people in this world, and I try to remind myself what a privilege that is.

UW: What’s the one thing you hope readers take away after reading Tell Her She Can’t?

KL: Naysayers are everywhere — don’t let them extinguish the light and power that is you. Chase your dreams, travel the world, tell your story, and don’t let anyone try to tell you that you can’t. You can. You will.

UW: What’s next for you?

KL: I’m currently working on the audiobook version of Tell Her She Can’t and the second book: Tell Her She Can’t Choose. I just love hearing stories from badass, triumphant women, and this project has grown so quickly. I hope to keep putting out inspiring books for as long as I’m able. The feedback so far is that this is the modern, feminist version of “Chicken Soup for the Soul.” And I’m here for it!

Tell Her She Can’t is available everywhere books are sold, including Amazon, Barnes & Noble, Apple, or direct from their website.