The temazcal ritual begins outside of Cenote Aluxe in the Mexican Caribbean. Standing outside the cave’s entrance, we ask the “Aluxes”—tiny and playful spirits of the sacred waters below and guardians of all Mayan lands—for permission to begin our journey to the underworld.

Copal resin mixes with herbs burned from a smoking chalice as we walk up a short gravel path to the entrance of the temazcal. Palm leaves, flowers, and herbs encircle a raging fire in the already sweltering jungle heat. Feet firmly planted in the dirt, hands raised, Cristina del Razo—the Mexican healer leading the ceremony—begins a series of prayers, accompanied by her colleague and translator, Sara Gasporotto.

“Temazcal is a ritual that moves energy, which is why we begin by recognizing and asking permission from guardians and protectors of each cardinal direction, while saluting and humbly paying tribute to each energy, each element: Earth, Water, Fire, and Air,” Christina explains. “We raise our faces and hearts to Heaven, to Mother Earth, and to the very heart of existence. This is how we also recognize each of those elements inside ourselves.”

Cristina del Razo has been studying traditional Mexican and Mayan holointegrative therapies since the early aughts. She began her own spiritual awakening in the mountains of Michaocán with a tribe of the Red Road, where she studied integrative and traditional Mayan medicine and conducted women’s circles, moon dances, and vision quests. She arrived in Quintana Roo 14 years ago and has been practicing her healing work under the gaze of “wise Mayan grandparents” ever since.

“The word ‘temazcal’ comes from the word temazcalli of Nahuatl origin, which means steam house,” Cristina tells me. “Throughout all of North America, there are vestiges of steam baths and even cave paintings that show cabañitas and people smoking peace pipes with tobacco. Within the temazcal, the council of village elders made decisions about the future of their tribes; midwives came to accompany women to give birth to their babies.” Healers would also use them for women’s postpartum recovery sessions to “close hips” and help restore balance.

Before entering a temazcal, you must become like a child. Humbling yourself and readying yourself to open, release and receive. You’re entering the largely unknown territory of the soul, returning to the belly of the earth to uncover that which is hidden inside. You’re re-entering the womb in order to heal and shed all the bullshit (trauma, shame, heartache, old wounds) and essentially unlearn all the things you’ve been taught define you.

In the thick heat of the temazcal, Cristina hauls in a heavy volcanic rock from the outside fire on an iron pitchfork. The gray, grainy rock glows a faint orange hue as it’s carefully placed in the center pit, roughly two feet below in the ground, and shifted into place by small antler horns. She then rubs a series of medicinal herbs directly onto the volcanic rocks, setting off a dazzling array of small sparks reminiscent of stars.

“We enter the temazcal as little seeds to ‘finish gestating’ as the beings we want to become: free, conscious, healthy, and at peace. It’s an opportunity to give birth to ourselves,” Christina says. “The fire enters through the ‘grandmother’ stones to bring us their message of healing (to the physical body and the heart). The entire ritual is a re-creation of how we were once in the womb of our biological mother, giving us an opportunity to release memories or blockages that were implanted during gestation or [caused by] the environment we were born into.”

The flaming herbs of lemongrass, palo santo, jasmine, rosemary, sage, and copal evaporate into the enclosed domed air as we breathe in deeply. I can feel the thickness move through my lungs—clearing, cleansing, heavy. Next, Cristina and Sara bring in herbal-infused mineral water taken from the nearby cenote and spray it directly onto the rocks using a thick palm branch—flicking and brushing the water into the center stones.

“Now we will close the first door.” The first door is a small round skylight hole in the roof of the stone and mud dome. Sealing it—or the prospect of sealing it—feels terrifying and suffocating. Still, we dig deep, embarking on the necessary healing soul work, while paying homage to who we really are.

Cracking open the hardened, exterior layer of ourselves can sometimes be about chiseling away at the effects of the patriarchy. It’s also a kind of post-colonial unlearning. If any country knows the effects of colonialism, it’s Mexico; but Mexico is not a product of colonialism, they are survivors of it. Nature—the earth itself—is always the victim of it. Still somehow, many of these ancient, indigenous rituals—including the sites and temples in which they were originally performed—have managed to survive, even after hundreds, if not thousands of years later.

On a purely physical level, it’s hot in the temazcal. A breeze feels like the greatest luxury at the moment, or even a wisp of air, a deep cool breath. Except instead of being granted that, we get more heat. Shades of more darkness fill the space.

“I want each of you to say your name, where you’re from, the names of your parents, and what you’d like to heal,” Cristina commands, amidst a cacophony of sizzling water, drums, and songs. As we each speak, the perfumed mineral water steaming on the rock rises, rages, dances, mixes with our sweat, our words, our collective heaviness.

We place cacao and honey under our tongue as the water continues to rise.  “Aho,” we cry out in unison. I rub rose petals into my skin—my legs, my thighs, my arms, soaked in the floating herbs.

Aside from the spirituality of the temazcal ritual, there are proven physical benefits. Temazcales have been known to accelerate metabolism, eliminate toxins in the body, cleanse the respiratory tract and digestive system, regulate the nervous and circulatory systems, aid in gynecological problems, and even achieve a state of homeostasis of the body. The real work, however, is the soul work.

“The cenote is the entrance to the underworld. Let’s work on your own underworld,” Cristina says. “The temazcal allows us an environment of deep introspection and personal reflection. It allows us to see ourselves in all our nuances, recognize our own shadow, push ourselves to the limit of our known abilities before entering, and teach us that we can always discover something new about ourselves — that is, taking a step beyond what we thought possible.”

Cristina begins to sing. Drumming, shaking rattles. More rocks enter from the door, heavy and steaming on the pitchfork. More heat. More steam. Thick air rising. “Now we will close the second door.” Saturated silence. The earth pebbles press up against our damp skin. Darkness. Shadow. Deep earth-black shadows, with purple tints, vague outlines. Could it be a dance of the spirits or my own imagination?

Earth-based rituals “pay awe” to the seemingly impossible, nearly miraculous push towards survival. Through ritual we notice the tiny details of nature, the coexistence species, and our total interdependence on the Earth and each other. Feminism, to me, is also about reconnecting to our wild, inner nature and reclaiming our power—and so reconnecting with Mother Earth is a part of that journey. This is perhaps what the mystics mean when they speak of oneness, of wholeness: we are not separate from nature, but rather we are nature.

The temazcal doors open—both literally and figuratively. Most spiritual practices tend to concern themselves with the opening of doors and lifting the veil to reveal deep, hidden truths.  Spiritual reverence broadens our vision and channels a oneness with the nature around us in order to heal, be present, and respect the awe-inspiring, miraculous thing around us: life.

“It’s time,” Cristina concludes, “to unite in a single heartbeat.” First, we must release our insecurities and negative emotions into the fire, leaving it there. We must dig deep and find our own truths, realizing that sometimes enlightenment is found in the dark.

Special thanks to the Quintana Roo Tourism Board for hosting this Mayan Journey. 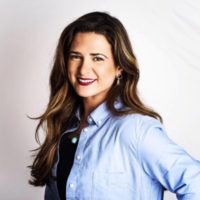 Amber is a Brooklyn-based journalist and editor specializing in travel, culture, feminism, and spiritual wellness. Formerly the original home & design editor for Culture Trip, where she helped build 3 verticals (architecture, design, and home & interiors) and co-editor of The Omnivore, she’s currently the editor-in-chief at Enchantments (a new digital publication from NYC's oldest occult store) and a co-producer for Unearth Women Magazine’s forthcoming feminist podcast entitled “The F-Word.” She also holds a Master’s degree in Liberal Studies: Women’s Studies, Gender, and Sexuality from CUNY. Her words can be found in Medium’s Human Parts, P.S. I Love You, Culture Trip, Atlas Obscura, and Teen Vogue, among others.