How Speaking to Syria’s Refugees Changed My View of Travel

Lately, I have been thinking a lot about traveling and what it really means. I have been exploring countries for more than a decade and the people I have met generally remind me of how lucky I am. They often say they would travel as much as I do, if only they had the chance to do so; they then go on about how their job, their family, their rent or their studies are holding them back and preventing them from catching that next flight to Paris or Bangkok.

Nowadays, traveling is seen as an accessible pleasure that we do to escape our daily routine. Whenever we have a vacation, people aspire to go travel the world. For a lucky some — such as travel journalists or bloggers — they have managed to make traveling their full-time profession. We long for the freedom that traveling offers; we crave the openness travel brings to our minds and the feeling of fulfillment that comes with it.

If you look up the word “travel” in the dictionary, you’ll find different definitions for the term. For some, it is the action of “making a journey, typically of some length;” for others, it is “to go from one place to another, as by car, train, plane, or ship.” The definition of this verb does not imply that this is something necessarily enjoyable. As we all look ahead to our next trip, we tend to forget something very simple: travel is not always desired or even enjoyable. Moving to another country does not mean we’re necessarily lucky to be changing locales.

A few years ago, I took on a new job in Jordan. Fascinated by the Middle East, I was excited to start working and living in a part of the world that intrigued me. I was answering the call of my beloved region and began picturing myself roaming the souks of Amman’s old town, floating weightless in the Dead Sea, and sleeping under the stars in the expansive desert of Wadi Rum. What I actually experienced upon moving to Jordan moved me so deeply that it completely changed the way I now look at traveling.

My work back then — as part of a non-profit — found me passing most days with Syrian refugees in various refugee camps in Jordan. I traveled the region to listen to and document the stories of these refugees and to ultimately humanize their realities. All the people I met during this job had one point in common: each and every one of them had traveled to get to where they now were.

For the first time in my life, I met travelers who did not see their journey as enjoyable, rather as their only way to escape what they defined as being hell. I heard terrifying stories and witnessed horrific wounds — some physical, others psychological — and noticed one commonality: traveling for these refugees was seen as a tragedy rather than a leisure.

If you talk to refugees, they’ll tell you how much they miss their lives back home in Syria. Most of them will describe Syria as a beautiful place that they long to return to. Refugees will tell you how no other country in the world could make up for what they had back in Syria. Listening to them talking about their lives, made me realize how grateful I should feel to have somewhere I can still call home — no matter where in the world I am — and (admittedly) how unappreciative of it I have been over the past few years.

All these discussions with Syria’s refugees made me re-evaluate what life and travel are actually about. It made me think twice before undertaking another trip. While I remain a passionate traveler, I now give more thought to why I always choose to move, while remembering those discussions with refugees who didn’t have a choice. The fact is, I am not lucky to travel, I am only lucky to be able to make the decision to travel on my own terms.

Traveling itself is not good or bad, it’s what generates it that defines its value. It is the freedom of choice that it often implies, that we should feel lucky of. It is the fact that we can select where and when we want to go, that we can afford it, and that we know we won’t find ourselves stuck at the border. It is the fact that we choose where to go according to our taste, and that we know that what we’re leaving behind will be there when we’re back. This is what we should be grateful for.

Working with refugees over those past few years opened my eyes to redefining travel and appreciating the simple freedom of choice. So, let us take the chance we’ve been given and keep traveling the world. Let us spread the word and open our borders to those who are stuck, like Syria’s refugees, who are fleeing conflict. Let’s never forget that tomorrow, it could be us as well.

You can support Syria’s refugees by donating to the UN Refugee Agency here. 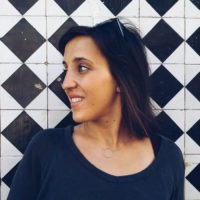 Though she was born in France, Elisa usually describes herself as a world citizen. She has lived, studied, worked and travelled in more than 50 countries throughout her life and she loves to share her passion for the world with others. When she is not planning her next trip or writing about the last one, Elisa likes to help people in need. She currently works for the NGO Doctors Without Borders (MSF) in the Middle East. Follow her on instagram @lisou.me