Guadeloupe's Festival of Female Cooks © | Courtesy of the Guadeloupe Tourism board

Cruise ships glide into ports and throngs of tourists descend onto white sandy beaches. They relax on island shores, swim in crystal waters, and enjoy sunset cocktails before filing back onto their boats and repeating the process on a neighboring island. Within the Caribbean lies a compelling dilemma: can island nations preserve their cultures whilst catering to the mass tourism their economies rely on? On the island of Guadeloupe, we find the answer.

The history of Guadeloupe, a cluster of French Caribbean islands, is rich and complex. The 630-square-mile archipelago is still gripped by French occupancy; yet despite the unavoidable pervasion of European customs, a Guadeloupean Creole tradition endures.

The Fête des Cuisinières—or “Festival of Cooks”—is a female-led celebration of Creole food that’s been held every August for a century. It’s a way for locals and tourists alike to participate in a time-honored ritual and serves the dual purpose of attracting visitors with an authentic relic of Guadeloupean history.

Guadeloupe is part of the French West Indies, also known as the French Antilles, a region comprised of seven islands under French sovereignty. The colonized language is French, their currency is the Euro, and France oversees the island’s government structures. Even the bakeries could rival your favorite Parisian boulangerie.

France claimed ownership of Guadeloupe in the mid-17th century and brought with them a population of West African slaves whom they put to work on the sugar cane plantations until slavery was abolished in 1848. In the course of Guadeloupe’s imperialist timeline, the island cultivated a new, composite culture; and from those disparate influences arose distinctive gastronomy.

Indeed, Guadeloupean food bears a direct connection to its history. French notes can be detected in the island’s cuisine, but the Indian, African, and Asian spices introduced to the island from the trade networks of yore are heavily intertwined with local ingredients.

In 1916, a cohort of house cooks forged an intimate collective focused on cooking, sharing, and preserving local recipes. What was essentially a cooking club evolved into the esteemed L’Association des Cuisinières de Guadeloupe, an all-female society of highly-skilled chefs. The Association inaugurated the Fête des Cuisinières as a means of ensuring the conservation of local heritage through food.

Each summer, the celebration begins at the Cathédrale de St-Pierre et St-Paul in Pointe-à-Pitre, where hundreds of women congregate to honor Saint Lawrence, the patron saint of cooks. Saint Lawrence was martyred on a grill in the 3rd century for distributing Church riches amongst the poor and remains a venerated figure for his charity.

Donning exquisite headscarves and aprons adorned with culinary iconography, the women of the Association enter the cathedral with baskets of utensils and Creole foods. During mass, members of the church bless the baskets, which rest at the altar, and upon the ceremony’s conclusion, the women pour out onto the streets for a most extraordinary procession filled with color, dancing, and music.

Armed with their now-sacred offerings, the chefs parade through the streets distributing Guadeloupean treats to spectators as a gesture of friendship and goodwill. The crowd transports to a banquet, during which home cooks and culinary professionals break bread over a table lined with regional dishes. While the majority of dinner guests are members of the Association, all women who feed the island are held in the highest regard.

“Today, the Association [of Chefs] is positioned as a guardian of culinary traditions and dress,” says Rony Theophile, President of the Association Les Cuisinières de Guadeloupe. From a local’s perspective, Theophile explains that the participating women are akin to celebrities—they move in unison through the city backed by music and flanked by cheering crowds.

L’Association des Cuisinières de Guadeloupe was officially established in 2001, constituted by hundreds of gastronomic professionals. The majority of members are age 50 and over, but the organization is encouraging the next generation’s involvement. Garnering the interest of young female cooks is essential to the prosperity of this Guadeloupean ceremony.

Colonization inevitably uproots the mores of a nation, and the Fête des Cuisinières honors the flavors of Guadeloupe that still thrive. Despite its humble origins, this culinary festival has blossomed into a treasured event with international recognition.

This story originally appeared in the third issue of Unearth Women magazine, available now in our online store. 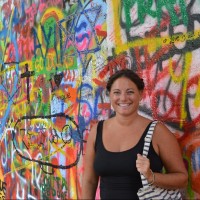 Abbie Synan is a writer and blogger who has been traveling and working remotely since 2013. A journalism graduate who fell out of writing, she created a position to follow her passion. After six years on the road and visiting over seventy countries, she is still in search of cultural experiences, tasty dishes, and unique stories to share one spot at a time. You can follow her sustainable travel journey on Speck on the Globe, where she shares tips on how to be a more ethical traveler and responsible global citizen.