At the Gorilla Conservation Café in Entebbe, Uganda, I order a latte while I wait for Dr. Gladys Kalema-Zikusoka. It’s not just any coffee in my cup, and as the name of the locale implies, this is not just any coffee shop. Both the café and the coffee are part of Kalema-Zikusoka’s collection of social enterprises that support her non-profit organization, Conservation Through Public Health (CTPH).

Kalema-Zikusoka, known to most as Dr. Gladys, is a pioneering wildlife veterinarian who has dedicated her career to saving the endangered mountain gorilla. She does so by improving the lives of the people who live on the edges of the gorillas’ habitat in the Bwindi Impenetrable Forest. Kalema-Zikusoka’s unique approach to conservation embraces the inherent difficulties of motivating a community to reserve concern for animals when they, themselves, are struggling.

Kalema-Zikusoka arrives wearing a black T-shirt featuring the Gorilla Conservation Coffee logo and the slogan: “Saving gorillas, one sip at a time.” She’s become a savvy businesswoman—she earned her MBA with a focus on social entrepreneurship in 2016, and she’s often photographed in shirts that highlight her initiatives.

Kalema-Zikusoka tells me she’s been interested in helping animals since she set up a wildlife club in her Kampala high school some 30 years ago. She attended the University of London’s Royal Veterinary College in the early 1990s, where about half of her classmates were women. When she returned to Uganda at age 25, she was hired as the first female veterinary officer for the country’s national parks. But when she spoke to local veterinary classes, she realized all the students were men.

“When I first started working with wild gorillas, there were no female rangers—hardly any women at all,” she explains. “Now, about a third of the rangers, trackers, and wardens are women. There are more vets as well, but there is a long way to go.”

At around the same time that Kalema-Zikusoka was studying in London, the Uganda Wildlife Service was beginning to recognize the tourism potential of its large primates—mountain gorillas and chimpanzees. Uganda, Rwanda, and the Democratic Republic of the Congo are the only three countries with wild mountain gorilla populations, and none live in captivity. There are just over 1,000 mountain gorillas left in the world, and about 60 percent of them remain in Bwindi.

Conflict between humans and gorillas has always existed on the edges of Bwindi. Gorillas come out of the forest to feed in the banana plantations, destroying the farmers’ livelihood. The animals pick up human diseases from dirty clothing on scarecrows. When the farmers are struggling, they enter the forest to hunt and gather wood for fuel, disturbing the gorillas’ habitat and creating more opportunities for disease transmission.

Kalema-Zikusoka identified human scabies as a fatal problem for the gorilla community during her early research in 1996. She realized that in order to improve gorilla health, she had to improve human health. When communities are healthy and thriving, there’s far less risk of disease spreading between the two species, which share 98.4 percent of the same DNA.

As a vet, Kalema-Zikusoka had the most health education of anyone in the organization, which had become the Uganda Wildlife Authority by the early 2000s. She created CTPH to provide sanitation and family-planning options for locals, who, at that time, had an average of 10 children per family.

“Family planning fit in very well with our mission in Bwindi,” Kalema-Zikusoka elaborates. “Only 20 percent of women were using modern family planning methods. Now we’re up to 60 percent. We present it as a way of balancing the family budget, so even the men in the household become interested. The women are happier. They feel liberated. It’s good for maternal health not to have babies every year.”

At the same time, Kalema-Zikusoka helped create a cooperative of about 75 coffee farmers, which provides production, training, and marketing support to brand their Gorilla Conservation Coffee as a premium product, and pay them a living wage. They earn 50 cents per kilo above market price for their beans, which are processed in Kampala, and $1.50 from every bag sold directly supports the work of CTPH. Participating farmers also offer a coffee safari program that teaches tourists who have come to Bwindi for gorilla trekking about how coffee is produced, and how the social enterprise supports community and gorilla welfare.

Bags of beans are for sale in the café as well as 60 other locations, including the duty-free shop at Entebbe International Airport. CTPH distributes trademarked Gorilla Conservation Coffee in the European Union, Switzerland, and the United States, where the beans are available from Pangols, a wildlife and sustainability-focused e-commerce site. Each bag of Arabica beans features the image of Kanyonyi, a silverback from Bwindi. His image also looms large in the café.

Through her work, Kalema-Zikusoka has strengthened the bond between gorillas and the people who live alongside them, improving the health of both parties along the way. In October 2018, she received a Sierra Club Award for her “Unique contribution to international environmental protection and conservation.”

In November 2018, mountain gorillas were removed from the critically endangered species list, though they are still endangered. The World Wildlife Fund cited “Community engagement, prevention of disease transmission and law enforcement” as key factors in the gorilla population rebound. “Gorillas are so similar to us,” Kalema-Zikusoka adds. “We want people to feel inspired to protect them forever.”

This story originally appeared in the 4th issue of Unearth Women magazine, now available for purchase in our online store. 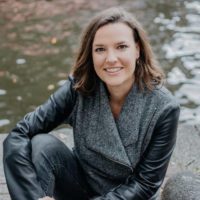 Christina Newberry is an award-winning Canadian writer now living in Amsterdam, where she’s learning to speak Dutch and navigate bike lanes. Her work has appeared in Canadian Traveller, Roads & Kingdoms, Time Out, and Fodor’s. Connect with her online at christinanewberry.com/hello.