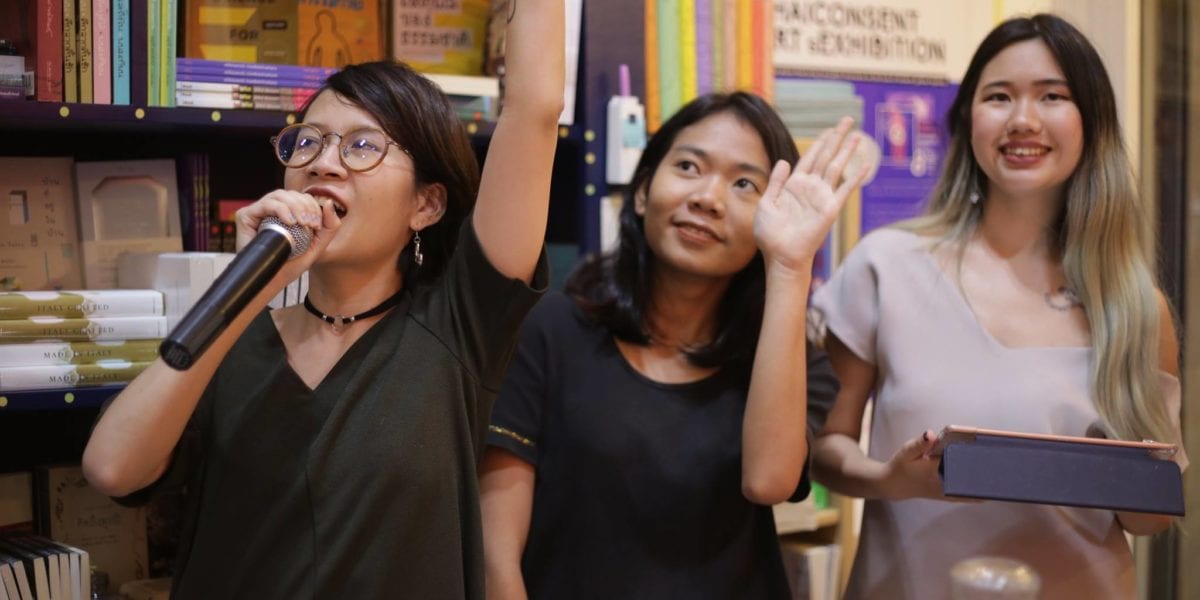 “You were raped because of the way you dressed; if not by this offender, you would have been abused by another.”

These words were spoken by a Thai police officer to a 12-year-old girl reporting a rape. In Thailand, comments like this are sadly unsurprising. Here, gender roles are strictly enforced—the Thai police academy recently announced that they will no longer employ female officers—and conversations about rape and sexual assault usually lead to victim-blaming. Even Prime Minister Prayut Chan-O-Cha has advised women to avoid sexual assault by covering up, comparing them to unwrapped candy. ‘Consent’ is rarely acknowledged and it’s completely absent from sex education programs. But Wipaphan ‘Nana’ Wongsawang is working to change that.

Nana is an illustrator and human rights activist endeavoring to spark conversation about consent in Thailand. She’s the founder of ThaiConsent, a website that encourages open discussions about consensual sex. She also created an affiliated Facebook page, 2CentsforConsent. There, people submit their anonymous stories relating to consent—or lack thereof—and with her team of artists, Nana creates bespoke artworks for each story before sharing them with the world.

Nana doesn’t want to simply raise awareness, she wants to generate change. That’s why she joined the Future Forward party, a new political group built by a diverse group of young scholars, activists, and entrepreneurs. In a country ruled by a military dictatorship with a history of coups, Future Forward represents a generation of Thai citizens who refuse to passively accept time-worn politics–and Nana fits right in. I met with her at the office of the Future Forward Party to talk about feminism, rape culture, consent, sex education, politics, and the patriarchy in Thailand.

Nana’s work in politics and activism are intrinsically linked. “Democracy is to ask consent from the people, but we don’t have this concept in Thai politics,” she explains. “It’s very easy to justify a coup d’état when you don’t care about consent. There is the idea that if no one has spoken out, there is consent, but that’s not true. There are many reasons why people can’t say how they really feel.” The junta claims that 99 percent of Thai people are happy with military rule. But claiming otherwise could be dangerous, as people have been jailed for criticizing the government or speaking ill of the monarchy.

“In our military government, power is not equal, and it’s the same concept with sexual harassment,” explains Nana. In any case, power imbalances make a huge impact, and the absence of a ‘no’ does not mean ‘yes’.

Yet campaigning for legislation is not one of Nana’s priorities as she doesn’t believe that’s how real change is made. Laws and punishments provide consequences for the few rapists who are brought to justice, but the only way to prevent these crimes is to educate people about them–and that’s what Nana is doing.

“I don’t really think that fixing the law is going to provide nirvana for victims of sexual harassment. I think that they just want support, understanding, and treatment, and the law isn’t really a tool for this,” she says. Outrage ensues whenever high-profile rape cases arise in Thai news, accompanied by public demands for rapists to get the death penalty. However, harsh sentences don’t deter criminals. Instead, they deter victims from coming forward.

“Not everyone wants to send their perpetrator to jail, especially in cases where it’s their friend, boyfriend or family member,” Nana explains. “They don’t really want to punish them with the law. Sometimes, they just want some understanding, or for him to apologize and to express deep regret. When we just focus on law and sending men to prison, it’s very difficult for women to come forward. It’s hard for them to think they can be responsible for sending someone to jail.”

This is part of the problem—rapists are seen as monsters who deserve jail time or even death, when they’re often people who exist in our social circles, our workplaces, and our families. Demonizing rapists can complicate the decision to call sexual assault when it does occur with someone familiar. In turn, it’s even more painful to unpack the nuances of rape, and how consent fits in.

That’s why Nana created ThaiConsent. “I wanted to tell people that there are many levels of sexual harassment and that it’s not only psychopaths who attack you on the street. What people don’t realize is that most of these things happen with people you already know and trust, but the key is that there is no consent.” In fact, research by the United Nations found that nine out of 10 rape victims in Thailand knew their attackers. “Even in cases where there is no intercourse, it can be an abuse of power,” Nana adds.

She recalls when a professor at her university hired a 19-year-old student as a model for a photo shoot. He asked her to make her poses progressively sexier and to remove items of clothing. It was a gradual and continuous test of boundaries. “She was alone with him and she trusted him, how could she say no?” It turned out he had been doing that to students for seven years. When news leaked, he was fired, but no charges were pressed. “The girl didn’t want to take it further with the police. She was already burned out just by reporting it,” Nana explained. Stories like this one are all too common.

The rise of feminism in Thailand is met with backlash from male expats, many of whom flock to the country with dreams of marrying subservient Thai women. They complain that foreigners are tainting Thai women with ‘Western feminism,’ which goes against local custom. Nana laughs when I ask what her response is to those men. “Fuck off! That’s all I can say to them. It’s not about Western or Asian feminism. Those men just want obedient women. They don’t want to feel guilty for how they are, so they use that as an excuse!”

The idea that feminism is foreign undermines Thai women’s autonomy. Nana explains that feminism is hardly new to Thailand; in reality, Thai women have always felt this way, but until recently, it was difficult for them to talk about it. “When I was young, I didn’t know what feminism was, but I always had a lot of questions. I wondered why I couldn’t do certain things, and why it was my responsibility to protect myself rather than the responsibility of someone else to control themselves. We just didn’t have the labels to discuss these issues,” Nana adds.

She means this quite literally—there are no direct translations for terms like ‘feminism’ or ‘patriarchy’ in the Thai language. “The Thai words for these terms are understood in the wrong way. People think that ‘feminism’ means female before male, and that patriarchy means men are bad. There is a lot of confusion about that.”

A common response is that women have power over the household because they’re often the ones who safeguard finances and make domestic decisions. Men, on the other hand, have to make sacrifices through obligations like military service. Nana refutes this argument.

“When we talk about equality, we don’t mean equality as slaves,” she says. “I don’t think that just because men have to sacrifice one thing, women should have to sacrifice another. It’s about freedom, and if we want men to be free from these sacrifices, we have to free men from the patriarchy as well. It’s not about freeing men from feminism, because women aren’t trying to replace men. Many men don’t understand that they are victims of the patriarchy themselves.”

That’s why Nana is advocating for men as well as women. She wants men to understand that they can also be victims, both of the patriarchy and of sexual assault. Male rape is often the subject of mockery, especially in the context of the prison system and during university hazing, or rub nong in Thai. “It’s just a joke to society, the boys have no choice but to take part and laugh,” Nana says woefully. “Men don’t always want to sleep with just everyone, they still need to have a choice and they still have to consent.”

Thankfully, the climate of acceptance is changing. Nana explains that women are angrier than ever, and that an increasing number of local women are speaking out. Social media has also played an integral role in facilitating the tides of change. “When I was a high school student, there was no one to support me and my connections were very limited,” Nana explains. “Now, you can get support from strangers, and that helps a lot. I think the kindness of strangers can be very helpful, perhaps even more helpful than kindness from people we’re close to.” This is why ThaiConsent is so well-received. It’s an anonymous platform to provide support and reassurance for victims without the risks that come with speaking publicly or making formal reports. Until now, this was never an option in Thailand.

ThaiConsent operates as the passion project of volunteer artists. Nana is working to secure funding so she may expand the initiative, hold more exhibitions, and provide services to sexual assault victims. Her goal is to see consent taught in Thai schools, which focus solely on reproductive science–sex, contraception, and reproductive health. In addition to revamped sex education, Nana sees the need for gender education programs. “I want students to learn about all genders and the power constructs that exist,” she says. “I want them to know what words like ‘patriarchy,’ ‘feminism,’ ‘binary,’ and ‘non-binary’ mean. Thailand’s society needs to learn about these things.”

A version of this story appears in the second issue of Unearth Women magazine, available for sale in our online store. 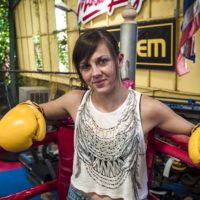 Emma Thomas a Bangkok-based writer, athlete and ESL teacher. She was drawn to Thailand by its national sport and has spent more than 7 years training and competing there as a Muay Thai fighter. Blogging about her journey ignited her love for writing, and she now spends most of her time writing about feminism and women in sports. You can read more of her work at UndertheRopes.com.