How Eva zu Beck is Promoting Tourism to Pakistan 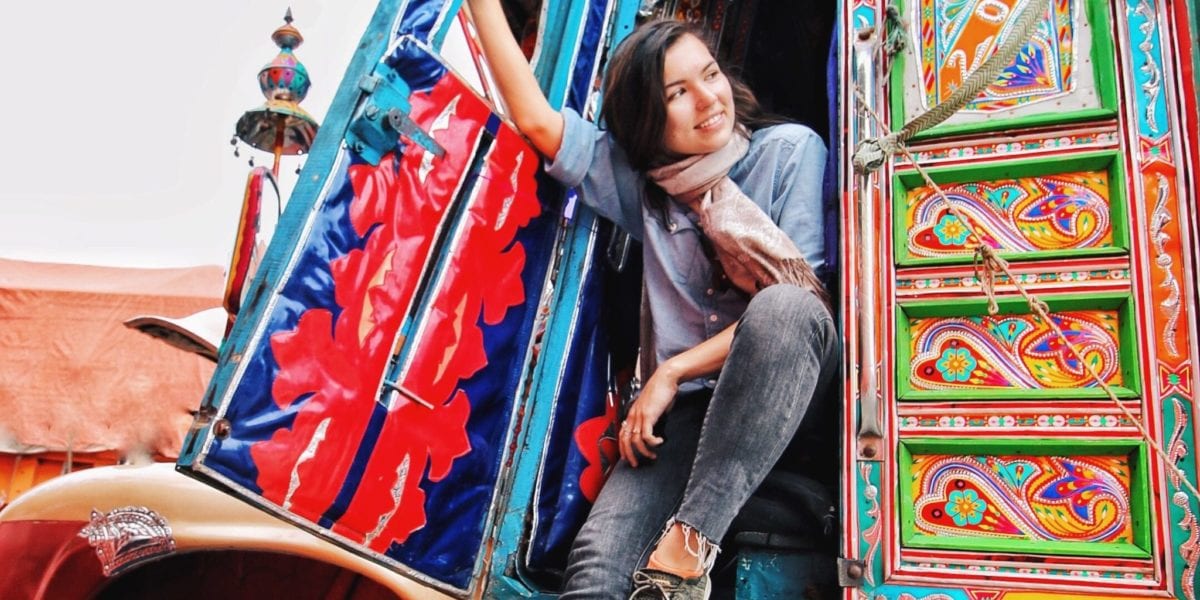 At 27, Eva zu Beck has built a life so many hope for when they quit their jobs to travel the world. After five years at the start-up media company, Culture Trip, in London, the Polish native gave two weeks and headed to Asia. She first arrived in Pakistan in April of 2018 for two weeks, but returned again in June, and has stayed put ever since.

Motivated to break into the predominately white, middle-aged male travel industry, Eva sought to make a name for herself as a travel vlogger. Instead, she was given one when a Pakistani follower made a mash up of her videos in the country that went viral. Several months later, “Eva Who Loves Pakistan” went viral once again. Now, nine months later, Eva is championed by her strong following for changing the way foreigners view Pakistan through promotion of positive content. In her adopted home, she is hosting a travel documentary, producing her own travel show, and promoting sustainable tourism in Pakistan.

Unearth Women (UW): Can you explain how you became an overnight sensation, garnering over 400,000 followers on your social channels, and how it feels to be representing Pakistan as the most recognized foreigner stationed there?

Eva Zu Beck (EZ): Going viral twice, as I have, is already a pretty surreal experience. Going viral twice in Pakistan, a country often perceived by the West as hostile and unstable, is even more difficult to process. And of course, when your face and content appear all over Pakistani media—from TV to online to print newspapers—mostly narrated in Urdu, it can be difficult to find your footing. Contrary to my fears, however, much of my content had a very warm reception in Pakistan, and people quickly recognized that my intention was to portray a positive image of Pakistan, both within the country and abroad. Now, over 400K people across all my channels are part of this mission. I feel that the best part of my job is not just being able to pursue my passion, but feeling that so many people share that passion too, and are part of the journey.

EZ: I’ve been thinking a lot about travel media these days, and realized that it’s typically limited to either TV or YouTube. Few creators stretch their travel content in equal ways across all channels, and even fewer creators approach their content as a continuous, high quality “travel show” with strong storytelling. That’s what inspired me to create a proper travel show for Pakistan,  something that hasn’t been done in many years, and never online.The show I’m about to produce will span all social media channels and, eventually, television. It will take viewers on a journey through places, food, and human stories much in the way a traditional documentary might. But it will also enable viewers to interact with the content, allowing them to send in their suggestions, meet with the creators and feel like they’re part of the journey.

UW: In an August press conference, you spoke about your mission to develop the local tourism industry in Pakistan. How does your current project accomplish that?

EZ:I frequently promote the idea of responsible travel by showing how simple it can be in most of my vlogs. For example, I often take part in litter picking campaigns, tree planting drives and other events designed to care for the environment,  and I believe that if more “influencers” did the same, we could really make a difference in how our planet breathes.

UW: You received national attention on Pakistani Independence day when a Kiki challenge video you made in collaboration with Pakistani Airlines went viral, and received some negative feedback for “disrespecting the Pakistani flag.” How did you deal with the backfiring of a promotional tactic intended to be fun?

EZ: This is probably the scariest PR challenge you can imagine as a travel vlogger. Going viral in a country labeled (wrongly!) as a “terrorist state,” for what some called “disrespecting” the national flag (again – wrongly). As soon as this video started attracting attention, I realized I had to take matters into my own hands and clarify the entire situation. As terrifying as it was, I made sure I appeared on all the big TV channels, spoke to anchors and journalists across the country, and clarified the intentions of the video. Soon, I found myself understood, and the narrative shifted from ambivalent to vastly positive and supportive. This warmth and hospitality is something you experience only in Pakistan.

UW: What is the social media industry like for Pakistani women?

EZ: Many Pakistani women still don’t post publicly on social media, most of them are on Instagram, but their accounts are almost always private. There are, however, some women who are trailblazing on the social media and vlogging scene and some of my personal heroes include Zenith Irfan (the first Desi girl to ride across northern Pakistan on a motorbike), Anam Hakeem (a frequent international traveler on the notoriously difficult “green passport”), and Anita Jalil Baloch, the only female vlogger in the ultra-conservative Balochistan province.

These women often face backlash and personal attacks on account of their social media activity, but they have also amassed incredibly supportive audiences who respect and admire their work. For many in Pakistan, their public sharing—especially as women —is seen as “indecent” (and therefore “un-Islamic”), but these women know that this isn’t the reality. What they are doing is carving out a space for women to pursue their passions, no matter what. I find myself inspired by them every day.

UW: What would you say are the biggest misconceptions surrounding Pakistan?

EZ: When I initially announced my plans to visit Pakistan to friends and family, the overwhelming majority of their responses ran along these lines: “Are you mad?,” “Isn’t every Pakistani a terrorist?,” “Women are oppressed there and have to wear burqas,” “Isn’t it just a big desert filled with warring tribes?” Nothing could be further from the truth.

The people here have big hearts, big smiles and open arms. I had never visited a country as welcoming or, indeed, as naturally diverse and stunning as Pakistan. And the women? Yes, of course, in parts of the country, girls and women face significant challenges in terms of education, careers, and future prospects. However, it was in Pakistan that I also met some of the bravest, strongest, most outspoken women I’d come across in my life. Women here know their worth, many of them work and set up their own businesses, and there are various movements around the country empowering women to take their lives into their own hands. Hands-down the most inspiring people I’ve met on my journey in Pakistan have been women, from female fighter pilots to mountaineers, to business owners and carpenters.

UW: Have you faced any challenges as a woman in the travel industry?

EZ: The sexism inherent in the travel industry was actually my initial motivation to get into the industry myself and buck the trend. I grew up watching the likes of David Attenborough, Michael Palin, Anthony Bourdain, and Bear Grylls, all of them presenting these incredible travel shows and taking us on trips around the world. The only problem? They were all white, middle-aged males. I just couldn’t figure out why the industry wasn’t catching up with the times. But as soon as I started vlogging, instagramming and carving out a niche for myself as a female traveler with an interest in adventurous, under-the-radar spots, I found that there is space in this world for women, too. And, honestly, I feel that I’ve had a very warm welcome.

UW: What is your advice for a single female traveling to Pakistan?

EZ: My initial advice is the same whether you’re a man or a woman traveling to Pakistan: prepare for the most epic trip of your life. Research the places you’re allowed to visit as a tourist, go in the warm season, bring your hiking boots and an open mind. Pakistan is not at all the scary place most people imagine it to be.

UW: What are the most compelling reasons for a traveler to visit Pakistan?

EZ: The rich culture, irresistible cuisine, incredible national beauty and human kindness are some of the things I still find myself mesmerized by. But as one German hitchhiker I met put it, traveling to Pakistan makes you feel like a “real explorer” discovering a place that not many people understand, and even fewer have travelled to. That is a truly special feeling in a world where everyone has been everywhere and done everything.

UW: Do you think you’ve influenced the way Pakistanis view their own country?

Yes, and this is probably the achievement I am most proud of. Every single day, I get messages from people telling me that their perception of Pakistan has changed since they discovered my account; that they’d never considered visiting the country until now, and that they suddenly feel proud of their roots and have been sharing my photos of Pakistan with their Western friends. This is hands-down the best part of my job: hearing that the perception shift is real, that the views are slowly changing, and that people are re-evaluating not only their opinions, but in some cases their identities, too.

UW: When and where can we watch your travel show, and the documentary you’re hosting?

EZ: The documentary I’m hosting will likely come out sometime next year. We have a lot of editing to do now! The intended audience is Western and English-speaking, so inshallah (hopefully) you will see it on one of the TV channels you’ve been watching your whole life. My travel show is a bit more nimble. It will be coming out towards the end of the year across my social media channels. Can’t wait for the adventure to begin!