The First Woman to Kayak Down the Amazon River

I have crashed my skateboard, my skis, and my kayak. I’ve yelled at math teachers and bosses. I’ve had embarrassing emotional outbursts—which have usually involved some version of, “I can do it myself!”—all in the name of my life’s work to prove that women are just as capable as their male counterparts. I’ve felt the world take notice, felt it point out my failures and chalk them up to my size, gender, or vegan diet, and yet have seen as the world rarely took notice of my successes.

From this well of frustration grew a fountain of motivation until on December 22nd, 2013, I sat on an uninhabited patch of white sand overlooking the Atlantic Ocean. I had successfully kayaked more than 4,200 miles down the world’s largest river and found myself wondering whether my accomplishment would get me something besides a sunburn and overdeveloped shoulder muscles. Now that I was the first woman to kayak the entire length of the Amazon River, would my achievement be recognized? I watch as far too many young girls are told they can’t do something by virtue of their gender, size, or appearance. Women tend to hear far more discouragement than encouragement for their endeavors, especially when those undertakings challenge the expected norm. With my success, I wanted to become a loud voice that stood against the naysayers and boldly told women: “Yes, you CAN do this.”

You see, I’m a small woman—a vegan who is 5’4” and 120 pounds—which makes me appear “weak” in the eyes of others. I’ve been told a “little female plant-eater” can’t do things like kayak the Amazon and yet, being little and a woman has never stopped me from doing what I want to do. I believed in myself—despite the creeping doubts—and did the unthinkable. Mine is a story of ignoring everyone who said, “No” as I defiantly paved my own way.

My doubts about the Amazon trip weren’t born until we arrived in Lima, Peru. Our preparatory days were filled with people explaining all the ways in which we might die during our attempt to kayak the Amazon River, each subsequent danger certain to kill us provided we survived the ones before. If river pirates didn’t rob or murder us, then narco-traffickers or Shining Path insurgents would. If we somehow avoided being crushed by dynamite rock in the dam construction zone, then the scared and insular Asháninka people would surely attack us. Or, we might stumble upon an illegal logging camp and get murdered by rogue loggers afraid of being reported. If, and only if, we escaped all those fates then we were sure to meet our demise in the fierce winds, tides, and monstrous waves of the lower Amazon river. In the days leading up to the expedition, I grew so uneasy that I wrote a goodbye letter to my family just in case the river claimed my life.

I would be kayaking with David Midgley, an esoteric computer programmer from London, and Don Beveridge, my boyfriend of 12 years. Our collective goal was to kayak the Amazon River from source-to-sea. No other group had kayaked the entire river, and no woman had ever attempted any type of source-to-sea mission. My expedition would be the perfect opportunity to show the world what women are capable of, but was it worth the risk? With violent death looking like a probable outcome, I started to wonder what was wrong with me. I felt confident about the whitewater but I was worried about the region where the flatwater started—now the world’s largest cocaine-producing area, among other problems. It would take us almost a month to get there so I decided to push that worry to the recesses of my mind, for now.

We left Lima to try to locate the source of the Amazon—an absurd task when you consider that the Amazon has over 15,000 tributaries and drains nearly 3 million square miles. Once we found our starting point at over 15,000 feet in elevation, we had to face 25 days of challenging whitewater before reaching the flats for which the river is so famous. Whitewater kayaking had been my career for the past decade and a half, so I was comfortable with this part of the expedition until we reached the site of a new hydro-electric dam. Dynamite work had relocated school-bus-sized pieces of rock from the cliffs thousands of feet above to the river’s bottom. The water now flowed underneath these rocks creating a nearly impossible situation for kayaking. We’d negotiated two and a half hours of dynamite stoppage, but it took us over five hours to get through the construction site. My nerves were frayed after hours of expecting to hear a dynamite blast any second—a sound that I was sure would be my last.

Once we got to the flatwater, we entered Peru’s Red Zone. The Red Zone is a loosely defined geographical region that is infamous for violence, drug trafficking, Shining Path holdouts, illegal logging, and justifiably distrustful Indigenous people. Just before entering this region—where two tourists and eight locals had been murdered the previous year—I made the decision to cut off all my hair. Explaining my fears of murder and rape to a Peruvian beauty salon owner, I held up the cover of a magazine boasting an image of a young boy and requested the same hair cut. Reluctantly, the owner acquiesced and chopped off my locks.

My new hair was just another part of the process of convincing myself this adventure was worth the risk of paddling through the Red Zone. I tried to mitigate my fears by using preparation to circumvent as many risks as possible. We got permission letters from different indigenous groups along the river whose territory we’d paddle through. We had a letter of introduction from the Peruvian Ministry of Tourism. We had gunshot wound treatment kits, and now I’d cut off all my hair to make my gender less obvious.

For locals looking on from afar, our trio looked like three men paddling down river. When we stopped at villages and I started talking, giving away my gender immediately, my being a woman actually seemed to make the locals more comfortable. We learned quickly that they were just as wary of us as we were of them. My presence seemed to ease the tensions between our group and theirs. As feminist activist and author, Gloria Steinem, wrote in the first issue of Unearth Women, sometimes women are allowed entry to places (both physical and psychological) that men are not.

After surviving the Red Zone, the expedition was about slogging it out through the remaining 3,000 plus miles of flatwater. It was about not fighting too much with Don and Midge, figuring out the tides that come 600 miles up the Amazon, and not succumbing to the daily wind, lightening, and rain storms that greeted us. We had to avoid falling prey to the dangerous and ever-present river pirates in Brazil, not take a wrong side channel, and convince ourselves not to quit, despite our growing desires to do so.

In light of the hardships, we found beauty along the river as we watched pink Amazonian dolphins surface and play near our kayaks. We watched each day end in a spectacular array of light exploding in colorful reflections off of huge, puffy Amazon basin thunderheads. We bonded with local people who could barely comprehend our lives—that we had the leisure to fly to South America and kayak for five months down this river. While waiting out the shift in tides at one family’s house, I held their pet parrot as their eight-year-old daughter showed me their stereo system and her mother told me how global warming was affecting the fresh water shrimping business in their community. The lower Amazon river was painful, mysterious, frustrating, and wonderful often simultaneously.

As I paddled along that iconic river, I spent much of my time contemplating what life would be like after I became the first women to kayak the Amazon River from source-to-sea. Would I be a different person? Would others view me differently? Would that sports writer from my local newspaper who’d nicknamed me “Diminutive Darcy” eat his words and now, decades later, finally be impressed?

I want people to appreciate the innumerable challenges of my journey, but more so I want them to look at me and say, “well, if she can do something like that, I can too.” I want them to be inspired to try for their own goals, no matter how unlikely/difficult/impossible they may seem. I truly believe we should all listen to the advice of our peers—and to some extent strangers—but that it’s our prerogative how we take their words. It’s easy to second guess your own judgement, it’s easy to let doubts of failure cloud your vision; but I’ve learned through years of struggle not to let other people’s words dictate who I am. Nor should you. Believing in yourself is often the hardest thing to grasp onto, but once you’ve got it, never let it go. 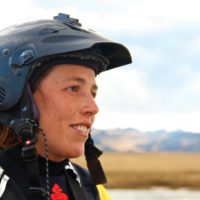 Darcy Gaechter is the first woman to kayak the Amazon River from source to sea. She is also the owner of Small World Adventures, an adventure travel kayaking business that runs trips in Ecuador, Idaho, and Arizona. Darcy has been in the whitewater industry for the past two decades in various forms: exploring new rivers, leading expeditions around the world, running an adventure travel business, writing about kayaking and helping to draw more women into the sport. She is the author of Amazon Woman (forthcoming) about her 148-day journey down the Amazon River and the author of The Kayaker’s Guide to Ecuador.

« A Food Lover’s Guide to Hanoi, Vietnam
Is it Safe to Travel in Honduras as a Woman? »