As Gender Violence Rises, Brazilian Women are Rising Up

I arrived in Rio de Janeiro as many foreigners before have, during Carnival. I never thought that my visit—during the height of Brazil’s renowned party period—would lead me to confront the many prejudices and challenges that local women are facing in Brazilian society today. To learn more about the growing frustrations of Brazilian women, I spoke with Sâmia Bomfim, a key politician for women’s rights and a councilor in São Paulo for PSOL (a left-wing party in Brazil) on the gender-based violence unfolding in this popular South American country.

A word I hear time and time again is “feminazi,” which is a term used to make women feel ashamed for standing up for themselves. “It isn’t just used for women protesting,” explains Fernanda Quintanilha, a local resident of Rio de Janeiro. “We get branded with this [word] for saying anything that is not right in today’s society for women.” It seems that the #MeToo mantra of thinking isn’t employed within Brazil where women are shamed for speaking out on relevant issues.

When you start to look past the celebrated beaches that hug Brazil’s coast, you see a country facing systematic engrained issues concerning women’s rights. Rio de Janeiro is one of few South American cities to employ female-only carriages to help prevent sexual assault to women. Rape, violence, and femicide are at epidemic proportions, while Brazil ranks as one of the top 25 countries in the world with a high rate of femicide. Meanwhile, a United Nations study found that 30 percent of women living in Brazilian cities have been subjected to sexual violence.

“Sexism in Brazil is so structured that there are changes needed in many areas of society,” explains Bomfim. Bomfim’s main area of change would be to introduce political reform that would allow for more women in parliament. Currently, political parties in Brazil don’t invest in women’s campaigns, leaving women hugely underrepresented in the country’s politics. Out of the 17 candidates running for presidential election in Brazil this year, only three are women.

In addition to political reform, Bomfim believes education is key in teaching younger generations about what constitutes sexism and for promoting gender equality.

“We need a change in our educational system so schools can contribute to the fight against sexism,“ says Bomfim. “[Our schools] don’t teach kids to grow up without these bad behaviors. It’s something that is needed for both boys and girls.”

Political and education reform is a topic the present marginalized Brazilian government does not want to fund. Not only is Brazil’s government choosing not to spend money on gender equality efforts, but right wing politicians are condemning the women’s rights movement as a whole. One congresswomen from a left-wing party was recently described as “too ugly to be raped by the right-wing congressman, Jair Bolsonaro.”

Gender-based violence and sexism is a deeply seeded issue facing Brazil; with the country gaining international infamy in the wake of two horrific cases of gender-based abuse. Brazil was forced to re-draft its legislation in regard to violence against women as it was condemned by the Organization of American States (OAS) for not providing enough rights for victims of domestic abuse. The updated 2006 legislation stemmed from the public Maria da Penha case, in which Penha was nearly killed by her spouse twice. First shot, then electrocuted in her shower, Penha’s husband walked out of the courtroom both times. Penha fought back and spent 19 years campaigning for justice. With the help of the OAS, Penha eventually jailed her aggressor under the new legislation act.

Another infamous case that sent shockwaves around the world was that of posted footage of a 2016 gang rape of a teenage girl. The video shows a young, unconscious woman being raped by multiple men. The police officer in charge of the case had to be famously replaced by a woman after he was quoted as saying he “could not rule out for certain that the girl had not invited the men.” With the rise of gender-based violence, Brazil shows alarmingly low rates of prosecution in their growing rape cases. Ten cases of gang rapes are reported a day in Brazil, and out of these only 10 percent are prosecuted.

In response, Brazilian women are taking to social media en masse to publicize the issues they are facing in their country. Brazil is currently the second biggest user of Facebook, Twitter, and YouTube behind the United States, and this culture of sharing has both spotlit women’s issues as well as connected victims of sexual abuse and violence.

Speaking to women’s rights activist, Janaina Silveira, she says “one of the primary reasons for a stronger feminist movement in this generation is the internet. It has given women in Brazil more visibility of actions of misogyny and the problems it causes. For a long time, men made us swallow suffering and we endured it but due to the internet there is now an open platform of awareness of the women’s movement and what is misogynistic culture.”

Women’s passion to end this suffering has recently been heightened with the killing of female councilor of Rio de Janeiro, Marielle Franco. Franco was a staunch speaker for women’s rights who had been attending a round-table discussion called “Young Black Women Moving [Power] Structures” on the day of her assassination. Two hours after the discussion, Franco was shot four times—three times in the head, once in the neck—by a drive-by shooter.

In the wake of Franco’s March 2018 assassination, Brazilian women have been taking to the streets, taking to social media and demanding change. In a country plagued by femicide, sexism, and gender-violence, Brazilian women are rising in waves to say “enough is enough.” 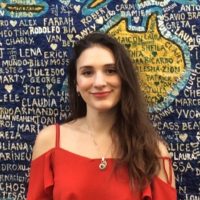 Nikola Radley is a retired London City girl with a Mancunian heart. She followed her dream after backpacking South America of living in Brazil. Nikola now spends most of her time working on her Portuguese (an everlasting work in progress), exploring Brazil and teaching children and young adults for an NGO within Rio de Janeiro's communities.